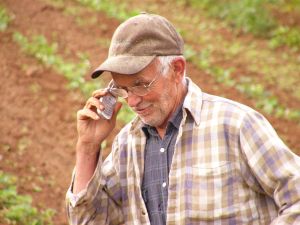 LONDON, September 2011 – It is not often a technology guru will say, “Forget the internet!” but Ken Banks, founder of Kiwanja.net, advocates going back to basics – using mobile phones rather than the internet, and pretty basic phones at that.

While mobile phones are ubiquitous in Africa, the internet has nothing like the same penetration and is almost non-existent in rural areas. Says Banks: “For example, in

Zimbabwe, there’s 2-3 percent internet penetration. If your amazing, whizzy mobile tool needs the internet, and you are looking to deploy it in Zimbabwe, you have lost 97 percent of people before you start.”

Dillon Dhanecha’s company, The Change Studio, was trying to distribute management tools and training through the internet, and admits it fell into exactly the trap Banks was describing. “We were developing short YouTube clips and so on, but I was in Rwanda a few weeks ago and trying to access our site from my Smartphone, and it just wasn’t happening.”

But there are plenty of options with even a not-very-smart phone: one of the pioneers was M-Pesa, designed as a tool for repaying microfinance loans. But Kenyans found all kinds of other uses; for instance, people afraid to carry large sums of cash while travelling would send it to themselves for collection at their destination. It was also key to the recent Kenyans for Kenya drought aid funding drive.

Another phone-based tool playing an important role in the drought- affected areas of East Africa is EpiCollect, developed by Imperial College, London, which allows the geospatial collation of data collected by mobile phone. Kenyan vets are using it for disease surveillance, monitoring outbreaks, treatments, vaccinations and animal deaths.

Even where there is no mobile-phone signal, they can record data by phone and store it until it can be transferred to a computer, producing an interactive map pinpointing where each observation has been made, with additional information about locality, even photographs, available at the click of a mouse.

Nick Short, of the NGO VetAid, has been greatly impressed by the possibilities, and the fact that ministries of agriculture and the UN Food and Agriculture Organization (FAO) can now track what is happening in real time.

“When I worked in Botswana,” he says, “We had an outbreak in the northwest of a disease called CBPP. It took us about two-and-a-half months to hear the disease was in the country. By the time we got there about 20,000 cows had died; we ended up killing 300,000 cattle.”

Short is also hoping its use during the current drought will help leverage assistance, helping potential donors pinpoint exactly where their money

will be going. “Just watching the BBC is not good enough,” he says. “This way people will actually see the animals they are benefiting.”

Banks has developed an SMS-based tool, Frontline SMS, which will work with even the simplest phones. By connecting a standard mobile phone to a laptop, data can be received or transmitted wherever a basic phone signal is available, without any need for 3G or an internet connection. It is freely available to any not-for-profit organization.

“In Afghanistan it has been used to send out security alerts to field workers. It tracks drug availability in clinics across East Africa, and house demolitions in Zimbabwe. Civil society groups in Nigeria have used it to collate information from their election observers, and it is used by a company distributing agricultural pumps in Kenya and Tanzania to keep in touch with farmers. Specialized versions are being developed for health and educational sectors, for NGOs working in law and microfinance, and for community radio stations”

In Afghanistan it has been used to send out security alerts to field workers. It tracks drug availability in clinics across East Africa, and house demolitions in Zimbabwe. Civil society groups in Nigeria have used it to collate information from their election observers, and it is used by a company distributing agricultural pumps in Kenya and Tanzania to keep in touch with farmers. Specialized versions are being developed for health and educational sectors, for NGOs working in law and microfinance, and for community radio stations.

But while the developers may be entranced by their tools, some dissenting voices were raised at the 1 September meeting in London. A Ghanaian lawyer, who declined to be named, said: “I find this depressing. Just monitoring is not sufficient; monitoring is just collecting data while people die.”

Short disagreed: “Without these tools no one knows what is happening in remote areas, and if you don’t know what is happening, you can’t do anything about it… If there were an outbreak of disease, we wouldn’t know about it until it was too late, and the animals were already dead.”

Shewa Adeniji, director of a small NGO called Flourish International, which sponsors community clinics in Ghana, expressed wider concerns about Africa’s love-affair with the mobile phone. “There are glaring benefits, but it’s adding to poverty on the ground. You have people in Nigeria struggling to pay 1,000 naira for medical insurance, and yet they will buy 1,000 naira top-up for their phones. These are misplaced priorities and meanwhile the telecom companies are going to African countries to milk them of their money.”

Banks accepted there had been cases of people buying phone credit rather than food or sending their children to school but pointed out that building a transmission network, especially in rural areas, costs money. “If mobile phone [companies] didn’t make money, we wouldn’t have the network of coverage we have. And once the network is there, people can use it… The technology can be used to do both good and bad, and you can’t really control that. You can just as easily spread a hate message as a health message, but you just have to hope that people will use it in a positive way.” (Source IRIN)

LGBT Rights in Argentina: A Model for Latin America

For a country synonymous with a culture of machismo, gauchos (cowboys) and a dance deeply rooted in traditional male-female dominant- submissive roles, the tango, Argentina is surprisingly leading the way for gender and sexual equality or LGBT rights in Latin America.
Read more

For decades, foreign hands have just messed up many things in the DRC and virtually robbed the country, it’s now time that the people of DRCongo decide their fate themselves and use their mineral resources wisely for the benefit of all Congolese people.
Read more