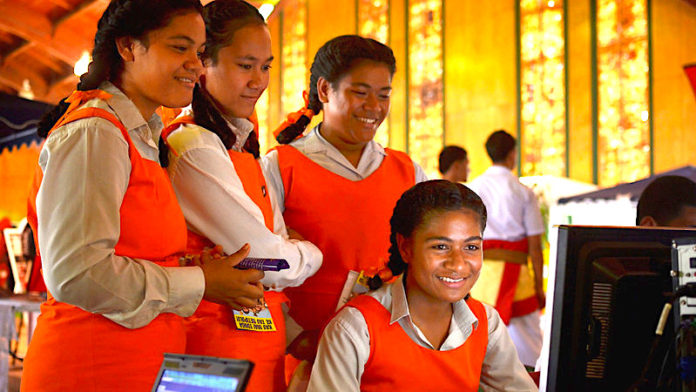 As the COVID-19 pandemic forces lockdowns, most countries and municipalities are pursuing digital government strategies, many with innovative initiatives – but vast numbers of people still do not have access to online services, according to the 2020 edition of the United Nations E‑Government Survey, released this week.

The 2020 ranking of the 193 UN Member States in terms of digital government – capturing the scope and quality of online services, the status of telecommunication infrastructure and existing human capacity – is led by Denmark, the Republic of Korea, and Estonia, followed by Finland, Australia, Sweden, the United Kingdom, New Zealand, the United States of America, the Netherlands, Singapore, Iceland, Norway, and Japan.

Among the least developed countries, Bhutan, Bangladesh, and Cambodia have become leaders in digital government development, advancing from the middle to the high E-Government Development Index (EGDI) group in 2020. Mauritius, the Seychelles, and South Africa are leading the e-government ranking in Africa. Overall, 65 percent of Member States are at the high or very high EGDI level.

“The pandemic has renewed and anchored the role of digital government – both in its conventional delivery of digital services as well as new innovative efforts in managing the crisis,” says Liu Zhenmin, UN Under‑Secretary-General for Economic and Social Affairs.

In responding to the health emergency, governments have put in place new tools, such as dedicated COVID-19 information portals, hackathons, e-services for the supply of medical goods, virtual medical appointments, self-diagnosis apps and e-permits for curfews. Many countries were quick to deploy tracking and tracing apps, and apps for working and learning from home.

Many countries were quick to deploy tracking and tracing apps, and apps for working and learning from home.

Innovative digital government responses to COVID-19 include online dashboards in Canada and Australia to share information and track emergency responses. In China, chatbots are used to assess patients’ risk of being infected. A community engagement app in Estonia allowed local governments to directly interact with their constituents, including through sharing COVID-19 information, posting photos and videos, and even organizing virtual events. In Croatia, a “virtual doctor” is powered by artificial intelligence and developed by technology firms in cooperation with epidemiologists. In London, the use of cameras, sensors, and AI algorithms, normally intended to control traffic, now measures the distance between pedestrians to control social distance.

As a development tool, the E-Government Survey examines countries’ strengths, challenges and opportunities, and informs policies and strategies. The 2020 edition found that progress has been made across all regions, even in the least developed countries. Over 22 percent of countries were promoted to higher levels of e-government development.

The 2020 edition found that progress has been made across all regions, even in the least developed countries.

“While e-government rankings tend to correlate with the income level of a country, financial resources are not the only critical factor in advancing digital government,” adds Liu Zhenmin. “A country’s political will, strategic leadership and commitment to advance digital services, can improve its comparative ranking.”

Yet, despite the gains and major investments in e-government by many countries, the digital divide persists. Seven out of eight countries with low scores are in Africa and belong to the least developed countries group. The regional average index scores for countries in Africa are almost one third lower (at 0.3914) than the world average EGDI of 0.60.

Alongside these trends, the COVID-19 pandemic has now not only reinvigorated the role of digital government in its conventional delivery of public services and in ensuring business continuity, it has also brought about innovative ways in managing the crisis, such as in contact tracing, e-health, online learning, and remote working.

About the UN E-Government Survey

The UN E-Government Survey, published by the UN Department of Economic and Social Affairs (UN DESA), is prepared over a two-year period following an established methodology. It looks at how digital government can facilitate integrated policies and services across 193 UN Member States. The Survey supports countries’ efforts to provide effective, accountable, and inclusive digital services to all and to bridge the digital divide and leave no one behind.

The goal of the buddy system is not the artificial redistribution of wealth from the wealthier to the poorer countries. The goal is to facilitate interaction and exchange between the buddy countries on different levels, from administration to citizen initiatives.
Read more

Hunger in the Desert: Famine in Somalia

By MOHAMUD HASSAN The fate of the toddler girl, until today, is still unknown. The...
Read more

The surging crisis is a combination of complex causes: intensifying conflict which has brought on an economic collapse, including dramatic food price increases in Yemen’s south, and a fuel import embargo hitting families in northern areas. The COVID-19 pandemic has compounded suffering as remittances have fallen, earning opportunities have dried up, health services been stretched to the limits and travel restrictions have compromised access to markets. On top of that, a locust plague and flash floods have battered local food production in some areas.
Read more

See Also:   Hit the Hardest: the Children Orphaned by Ebola