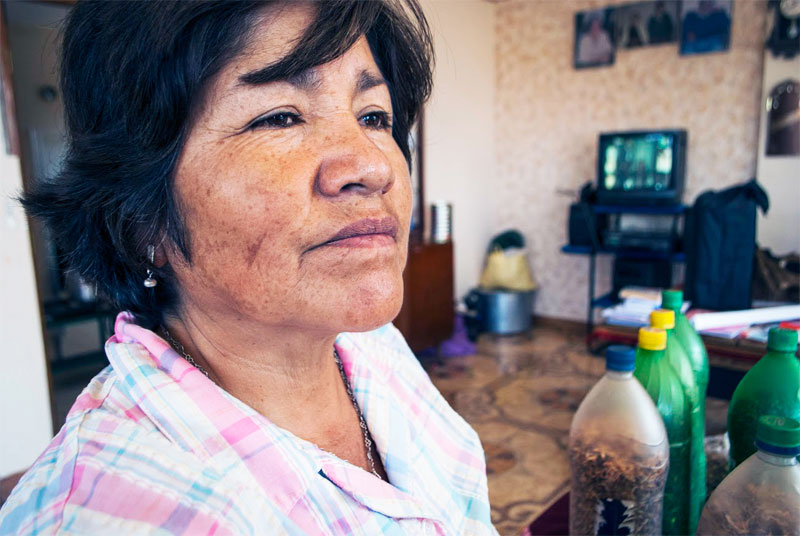 Climate change is about much more than climate change. Its impacts and driving factors intersect with a whole range of social, economic, political and cultural issues. Women, especially in the global South, are often particularly exposed to poverty, discrimination, lack of access to resources, exclusion from power and exposure to many forms of violence. When climate change impacts hit, the burdens women bear likewise increase disproportionately.

But women have also built up a great deal of resilience because of the challenging contexts in which they live. Often working together, they have sought new ways of overcoming poverty, violence and discrimination, and looked for ways to take greater control over the circumstances of their lives. Climate change only makes such strategies even more essential.

Carey Averbook and Leny Olivera spent several months photographing and talking with four women who live in María Auxiliadora, a collective community in periurban Cochabamba, Bolivia. The women here live at the nexus of problems described above, and moved into this collectively-held space in search of solutions. The wisdom of resilience on display in María Auxiliadora holds many lessons as we consider just ways of dealing with the many things that climate change is about.

One of the key threats of climate change is to crop yields, food prices, and choice and availability of foods. Recent climate impacts in Cochabamba province, such as flooding, drought and unexpected frost, led to 60% of 25,883 hectares of farmland either suffering complete loss of crops or severe damage13.

The plastic bottles in the background  here contain dehydrated vegetables which Doña Rosa prepares in her home. This has helped her when money was tight, or the prices of fresh produce rise due to climate impacts or political unrest. “If in the expensive periods we can use what is dehydrated, we can balance with the periods of good production. When vegetables are cheap we have plenty and instead of leaving them to go to waste, we can dehydrate them.” 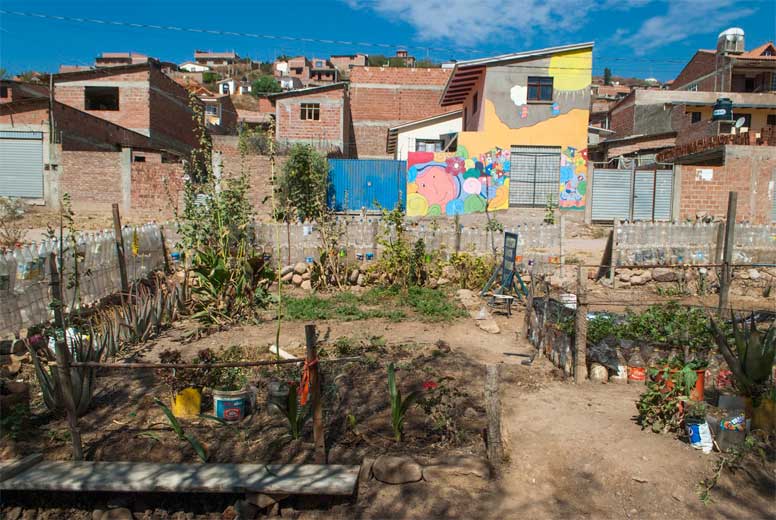 ‘The dangers associated with the climate affect poor people directly by impacting on their means of survival – such as crop losses or the destruction of their homes – and indirectly through, for example, higher food prices and food insecurity. For those people [poor women], the effects will be catastrophic unless emissions reduce15.’

Living in María Auxiliadora gives families security that can often be hard for women to find in Bolivia. As well as a reliable place to call home, they also receive plots of land on which to grow food. The gardens keep costs down, protect residents from price fluctuations, and bring benefits to families’ health, sustainability and general wellbeing. “When you have your own house you live more calmly,” says Doña Isabel. “My kids come, harvest from the garden and bring it for me to cook with…It tastes a lot better fresh.” 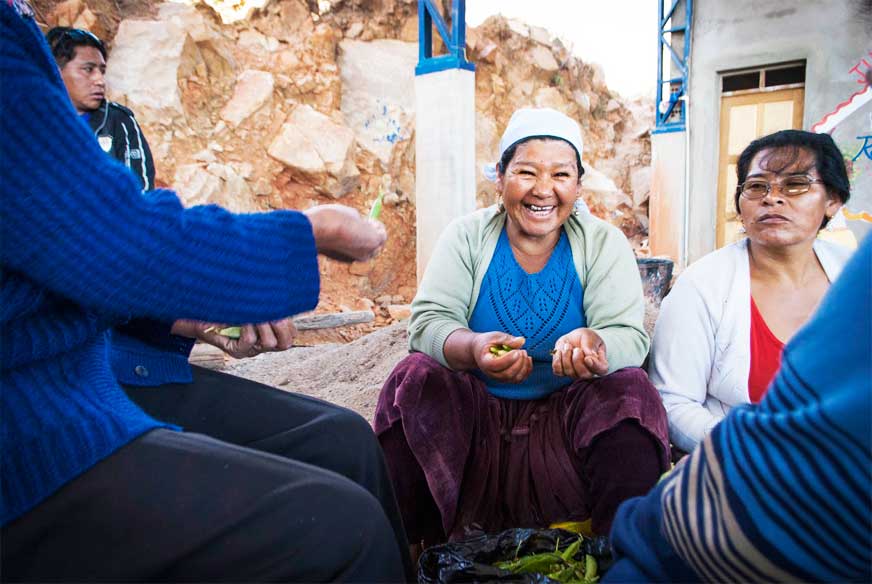 Nearly one in two women experience physical, sexual, and/or psychological violence at some point in their lives. Bolivia has some of the highest rates of gender based violence in Latin America, with a femicide occurring every three days. This is fueled in part by a strong machismo culture and heavy drinking. Figures from the World Health Organization reveal the consumption of alcoholic beverages in Bolivia as equal to 8.3 liters per head, compared to the average 5.7 liters for Latin America.

María Auxiliadora is organised along collective lines, with residents working and taking decisions together to shape the community. Key positions are all held by women, and protecting each other from violence is a crucial element of how the community looks after its residents. “Whenever there is violence, a group of women always gets together. They whistle when they hear husbands beating their wives,” says Doña Isabel 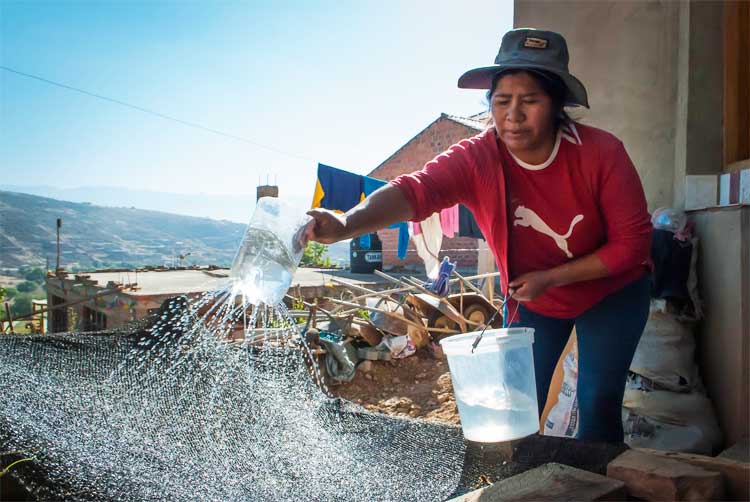 Doña Maria Eugenia waters her seedlings. The community has received funds to install a water recycling plant. “Some people think it is a burden to have a family garden,” says Maria Eugenia. “I always say you can do it while brushing your teeth – you have to water the garden, but you don’t have to be seated beside it the whole time.” 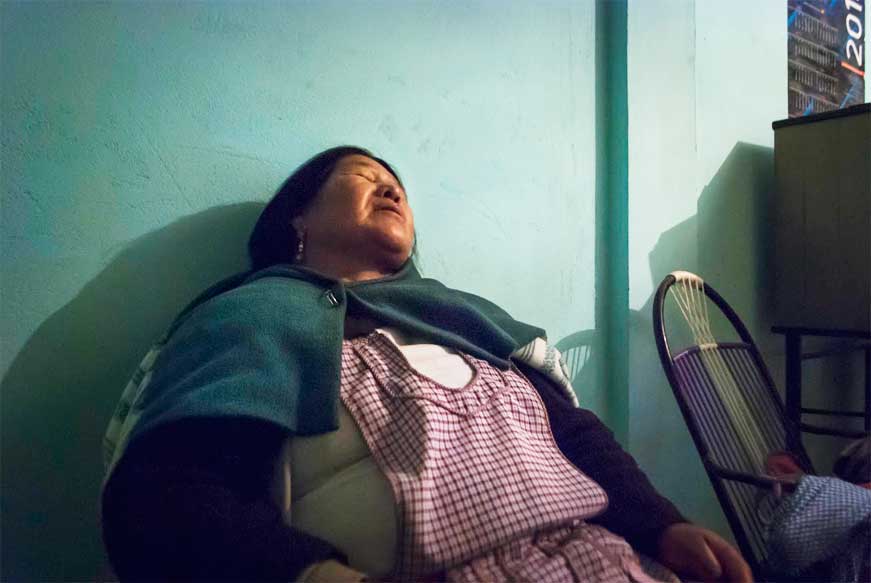 Doña Isabel rests after returning from work. As well as being mothers and attending to their community responsiblities women in the community often have two or three jobs and little time to sleep, let alone relax. Every day Isabel gets up at dawn to cook, clean and feed her animals, then works a 10.5 hour shift on a school lunch support program.(Continue Reading >>)

18-year-old Adhir Pasvan from the east Indian state of Bihar, was trafficked and turned into a slave at a shoe manufacturing unit 1200 miles away from home. According to government reports, an astonishing 100,000 children go missing in India every year and many of them are never found.
Read more

By Melanie Andrews 75 Persons with Albinism (PWA) have been killed in Tanzania since 2000, according to UN estimations. UN officials have spoken about their fears that attacks will rise with the upcoming Tanzanian presidential election since politicians seek good luck from witch doctors.
Read more