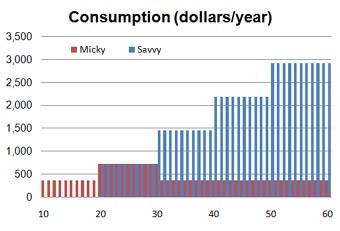 The development community has for years been heralding microcredit as a means to escape poverty, but some very simple math suggests that we need to be cautious about pushing it too much.

To do this simple math, let’s compare the life-stories of two fictional boys who are both born poor. Let’s call them Micky and Savvy. Both work part time from age 10 earning 1 dollar per day, but they live at home with their parents, who provide for their basic needs. Micky spends his hard earned 7 dollars every week-end with his friends, while Savvy saves them and manages to invest his modest funds at an average real rate of return of 10% per year (mostly by lending money to needy friends and relatives).

By the age of 20, they both move away from home and start working full-time. Paid work only pays a miserable 3 dollars per day, so Micky decides to start his own business instead. He borrows 6500 dollars from a microfinance institution in order to buy the necessary equipment to run his business (for example a used car to become a taxi driver), and this allows him to earn twice as much as a paid worker for the next 10 years (i.e. 6 dollars per day instead of 3, from age 20 to age 30). The real interest rate charged by the microfinance institution is 30% per year, so Micky wisely decides to spend as little money as possible on himself (2 dollars per day, which is right at the poverty line) and uses the remaining 4 dollars per day to pay back his loan.

In contrast, Savvy does not have access to credit, so he has to accept the job that pays the miserable 3 dollars per day. Like Micky, he keeps his expenses low at 2 dollars per day, which leaves 1 dollar per day in savings, which he manages to invest at 10% per year, just as he has been doing since he was 10 years old.

By the age of 30, Micky has handed over all his savings during 10 years to the microfinance institution (14,600 dollars – more than twice the amount he borrowed and 2/3 of everything he earned), but his debt has only grown, now amounting to about 8,700 dollars. His equipment has worn out, so he can no longer earn 6 dollars per day, and instead has to take a regular job paying 3 dollars per day. He is now heavily indebted, and has to reduce his expenditures to an absolute minimum (1 dollar per day, which is at the extreme poverty line). The remaining 2 dollars per day he pays to the microfinance institution.

See Also:   'We are in the midst of an intense global transition', an interview with Zaynah Khanbhai, founder of South South Women

In contrast, Savvy has been building up his savings one dollar per day, and by the age of 30 he is worth more than 20,000 dollars, so he decides it is time to improve his living standards (he doubles his daily expenditures from 2 to 4 dollars). He is still only earning 3 dollars per day as a regular, unskilled worker, but the returns on his small investments allow the additional expenditure without reducing his capital.

Unless Micky declares bankruptcy or otherwise defaults on his debt, his debt will accumulate for the rest of his life, reaching a staggering 20 million dollars by retirement age (60 years). In contrast, Savvy can keep increasing his expenditures regularly, reaching levels far above the poverty level and far above his income level; and still see his net wealth increasing. Figure 1 compares the net wealth of Micky and Savvy over time under the abovementioned assumptions.

Figure 2: Annual consumption of Micky and Savvy, from age 10 to age 60

A lousy little loan, which seemed like a good idea at the time, doomed Micky to a life in extreme poverty and heavy indebtedness, while Savvy, who couldn’t get a loan, did very well. When real interest rates are above a few percent, it makes a huge difference whether you are on the borrowing side or the lending side of the credit transaction. And in the world of poor people and microcredits, real interest rates are always in the two digit range.

In some cases it makes sense to borrow money, even at 30% interest. For example, if you borrow money to buy goods that you are sure to sell very quickly, this may allow you to take advantage of business opportunities that you would otherwise be excluded from. This is why most micro credit is used by the informal commerce sector. For productive activities, microcredit rarely makes sense, and for housing and consumption purposes it is a distinctly bad idea.

Microfinance institutions will of course never let debt grow into the millions. Instead they would confiscate the few assets the borrower has, including even his home. In case of group credit, they may also confiscate assets from other borrowers in the group, if these are unable to pay the debt. The devastating consequences of not complying with the monthly payments to a microcredit institution make defaults relatively rare, as borrowers will do anything in their power to comply, even borrowing informally at an even higher rate.

Thus, if you thought micro credit will help solve the problem of poverty, you might want to do a bit of math to understand the astonishing power of compound interest.

"Our approach to South-South cooperation is about generating mutually beneficial opportunities and results by cultivating values with one another and our counterparts in the North. In the process, we demystify stereotypes and create innovative standards for collaborations and measures for success," says Zaynah Khanbhai, founder of South South Women.
Read more