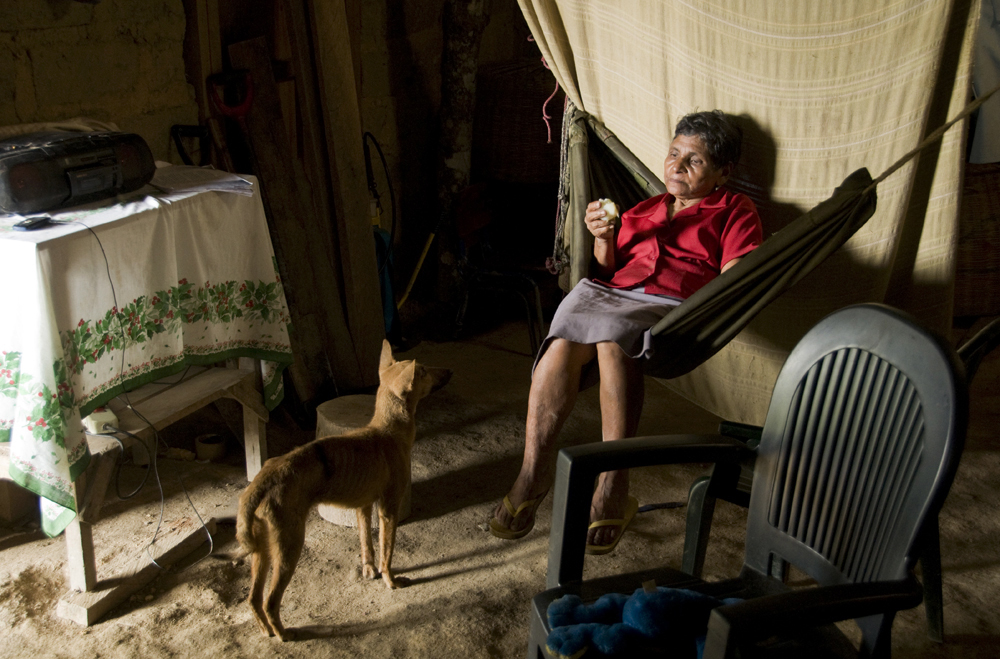 Nicaragua is the second poorest country in the western hemisphere. The governing political party, Frente Sandinista de Liberación Nacional(FSLN), was brought to power after overthrowing longtime dictator Anastasio Somoza in the 1979 revolution.

In the 1 980s, the FSLN began implementing social programs aimed at reducing illiteracy and hunger, but was soon forced to divert scant resources to fight Contra Wars against U.S.-armed militias, which were notably composed with Somoza’s former guardsmen. Today, the nation is still recovering from decades of violence and many residents, known as “Nicas”, lack basic food items as they watch local crops get shipped overseas. The following is a compilation of thoughts and conversations from the rural areas in the northern Nicaragua one month before the 2011 elections. 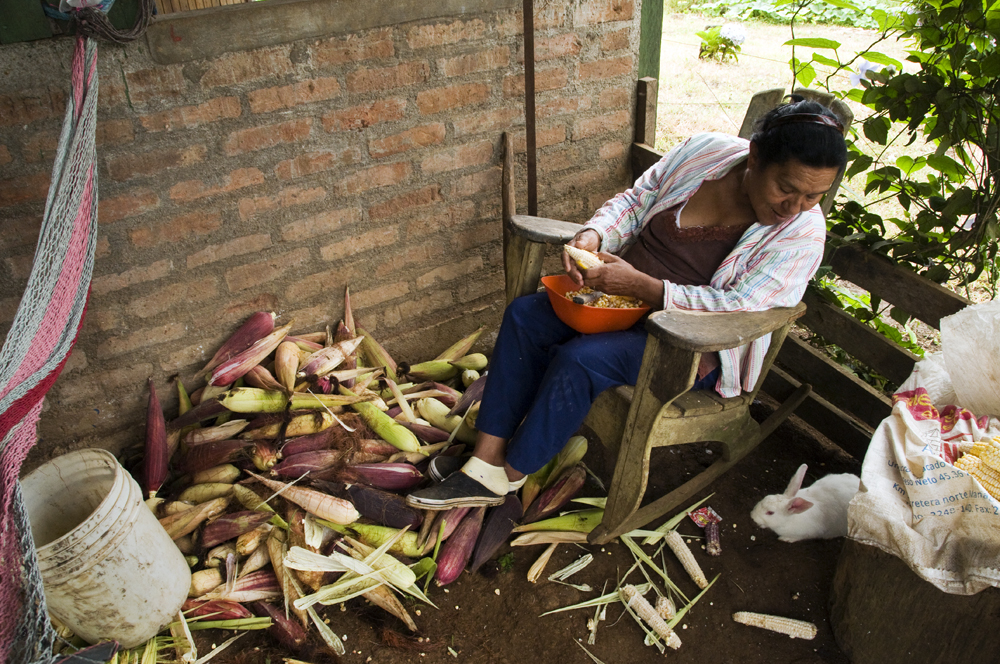 We spent four days in a tunnel once.

During the war, the Sandinistas used underground tunnels to get from one house to another. It was a good way to trick Somoza’s men and escape.

At one point they were bombing Esteli. The military was all over the city. Soldiers would radio each other before bombing raids and say “take cover, we’re going to drop candy.”

Twenty of us had to stay in a small tunnel for four days during a period of very heavy bombing. I was the only one that would go out in the street to see what was happening.

How did we eat? We didn’t eat, it’s that simple. We had one bucket for piss and that was it.

The war was terrible, but it felt good to fight for something we believed in.

I was a nurse through most of the revolution. We went out in the mountains and gave aid to guerrillas in their camps. After the war I was a teacher in Esteli. We won the war and our main goals were to educate the poor and help farmers.

But we weren’t allowed to do that.

Señor Reagan started the Contra War after Somoza fell. He armed Somoza’s former military men, trained them in Honduras, and there were always battles near the border.

It was a very hard time.

The U.S. put an embargo on us, just like the one in Cuba, and they didn’t stop it until the FSLN lost power in 1990.

Now we’re back in power. We have Daniel. He’s not so great, but we don’t have a better choice. He’s the least evil of our choices. Who else am I going to vote for? The Reds?

It’s been hard ever since the revolution, sure. We’re in a transitional faze. I guess it’s normal.

But the worst part, the absolute worst part about everything I’ve experienced in my life is how the U.S. always gets involved in our lives. They never leave us alone. They want to control the world and here, in poor little Central America, they really show it.

See Also:   Can War Be Good for Development? 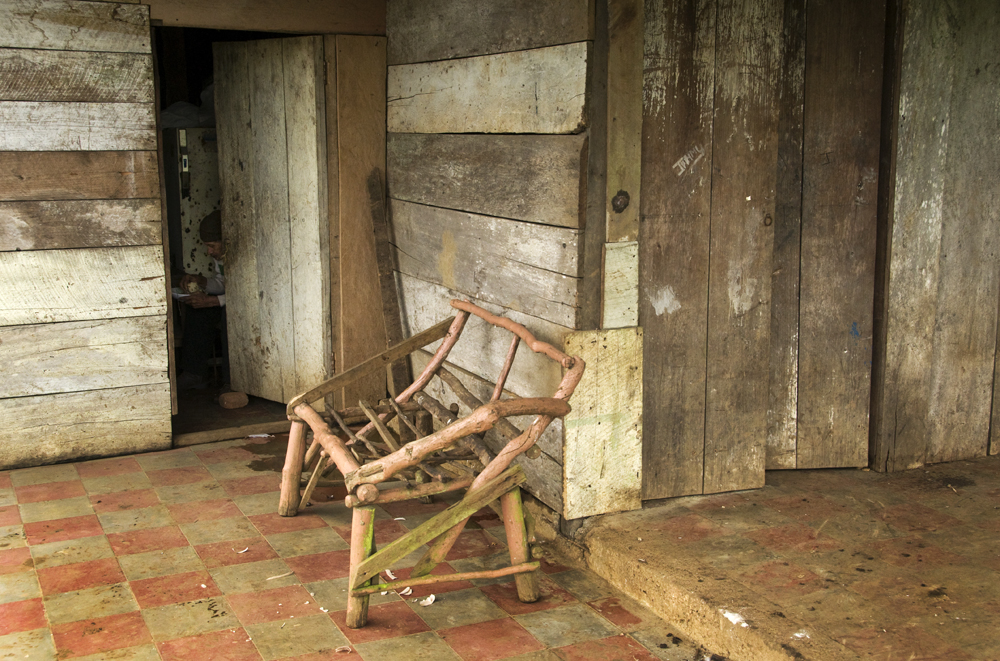 “He’s lived more than a hundred years and he lost his vision three months ago.”

“He worked hard all his life. He was a tough man, but now he just stays in his room all day because he doesn’t want anyone to see him so old and so blind.”

“He says he doesn’t like being with people anymore because he can’t see them. It makes him uncomfortable.”

“He’s funny, though. Last night he was yelling for me to make him coffee. It was four in morning. He can’t see so he doesn’t know what time it is anymore. Night and day are the same for him.”

“You know, he met Sandino in person when he was a teenager. After that, he went on to do a lot of work for the FSLN.”

“Is he dead yet?” A voice asked from the kitchen.

“No, I checked on him this morning, but maybe he’s dead now.” 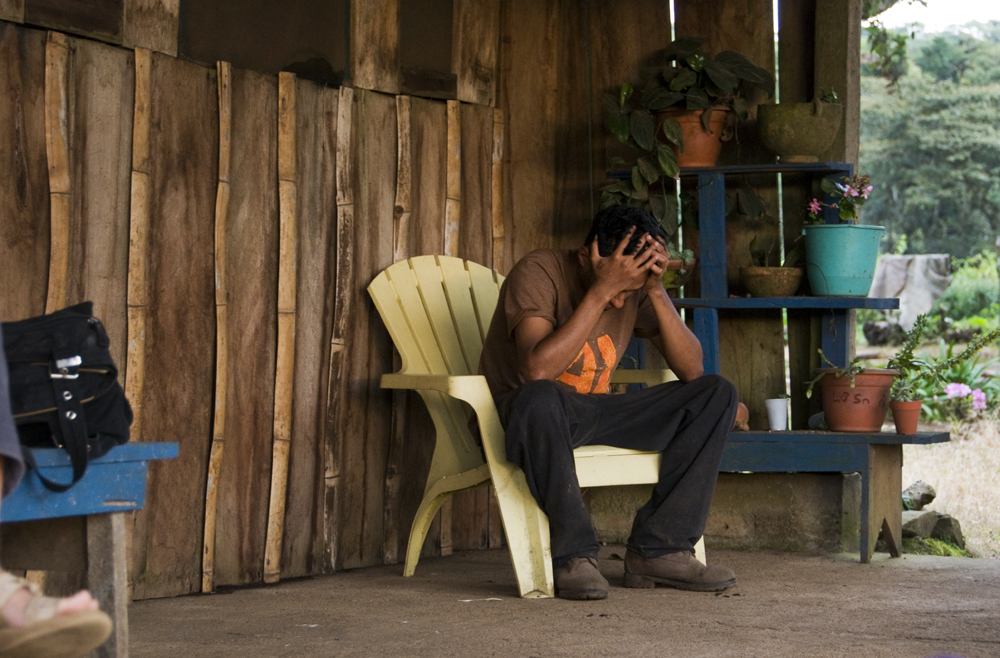 No, I’m not voting in the elections.

There’s no real opposition and the FSLN has all the money. It’s corruption. 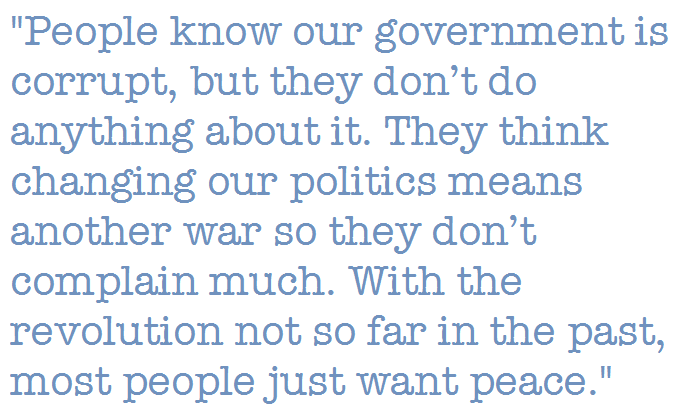 Let me give you an example. We have special officers that count the votes in every election. Normally, each party has their own officer, but all of the officers are now part of the FSLN. Basically, we have people counting votes for the parties they’re running against.

People know our government is corrupt, but they don’t do anything about it. They think changing our politics means another war so they don’t complain much. With the revolution not so far in the past, most people just want peace.

The FSLN knows this and it’s part of how they stay in power. Not many people will speak badly about them. It’s dangerous to speak against them. They don’t kill you or torture you like Somoza, but they’ll ruin your life.

You know, they have offices in every town where they give you a special document saying you’re a Sandinista. If you’re against any of their policies they take this document away from you and this is important because most places require it when they hire you.

Daniel is looking more like a dictator every year.

Daniel always criticizes the U.S. in his speeches, but then he signs trade deals with them when he gets back to his office. We’ve been getting more help from Chavez lately, but he’s the same. Chavez yells and screams about U.S. imperialism, but in the end, he sells most of Venezuela’s oil to the U.S.

It’s the same story in every Latin American country. We seem to copy each other, dictators and all.

Me, I just want to make a little money and support my family.

It’s hard living here on the farm. We loose a lot of money and we don’t even have enough people to work the land anymore. Everyone’s moving to the cities thinking they’ll have better lives, but they just find more problems. You have to buy everything in the city and most of it’s pure garbage.

I don’t know what to do, really. I feel stuck. Maybe something will change later, but for now we have Daniel and Daniel promises everything and delivers little.

The war was horrible. We never had enough to eat.

It was worse for the children though. They suffered the most. Children and old people. Anyone who couldn’t run fast enough.

This was my family’s land, but we had to move to Managua during the war. It was too dangerous here near the border. There were troops everywhere. They passed by every day. They’d take people away and we wouldn’t see them again.

That’s what they did. It was worse during the Contra War. They came to poor villages on purpose. They knew no one would notice. No one was watching. They did what they wanted to us.

We couldn’t come back home until the late 80s. Fifteen years after we ran away. When we arrived the FSLN had stolen parts of my father’s land and gave it to other people. It was part of their anti-poverty campaign.

But we were lucky. We got to keep most of our land. Other people came back and found new families living in their houses. I knew a woman, the FSLN took her house and she had to move to Canada as a refugee. She had three children up there and stayed there. I guess she’s doing well.

Us, we have to stay here. This land is what we have. It’s not good land and not much can grow in it, but it’s ours. We grow coffee. That’s what we do.

At least we have peace now. That’s all I want.

Do you want something to eat?

I get worried when you don’t eat.

Diego Cupolo is a freelance photojournalist currently based in Buenos Aires, Argentina. His work focuses on environmental and socioeconomic problems in the developing world.

How do you feel about these thought-provoking photos? Reply in the comments below.

This article originally appeared in the October 2012 issue of Global South Development Magazine that focused on inspiration.