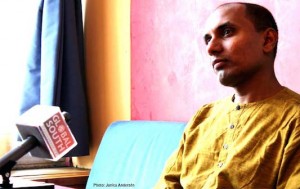 When it comes to socio-economic development, Sri Lanka is taken as a remarkable example in south Asia. That development, however, is not equitable and neglects the Tamil minorities, says the Sri Lankan human rights activist, K.M. Rukshan Fernando.

Mr Fernando, head of Human Rights in Conflict programme- Law and Society Trust, Sri Lanka, has been working in the field of human rights, peace and reconciliation in Sri Lanka for more than 13 years. Global South Development Magazine’s Editor- in-Chief Manoj Kr. Bhusal met with him interviewed him in Helsinki where he was invited as a guest speaker to a seminar on human rights, development and democracy. Some excerpts from the interview:

Could you tell us a bit about yourself and the work you do in Sri Lanka?

My name is Ruki. I have been working in the field of human rights, peace and reconciliation for about 13 years, primarily in Sri Lanka, but I have done some work at regional level in Asia. And the organization I work with now is Law and Society Trust. It’s a human rights organization based in Colombo, but we do a lot of work on advocacy, research, documentation, training and also protection.

How is the current situation of human rights in Sri Lanka?

In compare to the war period, cases of human rights violations have decreased in number certainly, but still numerous cases of human rights violations can be witnessed in Sri Lanka every day. Attacks are targeted at people who are intolerant, dissent and critic of the ruling regime. You can see many political parties, politicians, human rights activists, journalists, lawyers, religious leaders, or even doctors who are critical of the current ruling regime and voice dissenting opinions being penalized, some have been killed, abducted, threatened, assaulted and we don’t see anything being done about these attacks. It’s quite clear that the government is behind some of these attacks although the government denies it. And even if the government isn’t responsible directly, the government hasn’t been able to stop it and it has not been able to identify, prosecute and convict those who are responsible for abuses of people who have dissenting views against the government.

But it is important to know the war itself was about three decades, thirty years, but the ethnic conflict is more than fifty years old. The grievances of the Tamil people who are minority in Sri Lanka are yet to be addressed. And sixteen months after the war, there are no signs that the grievance of the Tamil community is going to be addressed. There is no political solution in terms of restructuring of the state so that Tamils can share power. There is no signs that crucial issues of the Tamil community will be addressed, thousands of people who have been detained without any charges, some for more than ten years and also people who have gone missing for over number of years, particularly in the last four years since 2006, or even acknowledgement of the people who have been killed, death certificate issues, compensation for those killed and so on.

Does it mean that incidents of human rights violations are increasing rather than decreasing?

I think it’s difficult to say whether increasing or decreasing. There are times suddenly you think everything is okay, human rights violations have gone down; but suddenly they rise up again. For example in the last few weeks we have seen a lot of human rights violations in terms of particularly people who are forced at the tents of the government to seek more control of its power through amendment of the constitution. So people who printed a poster are detained right now. You thought that the violations are going down in terms of numbers, but suddenly you have a surge of new repressive measures. So it’s very difficult to say.

So can we still call Sri Lanka a democratic state?

Officially Sri Lanka is a democratic country and the constitution says the same. But I think an essential feature of democracy is tolerance and appreciation of dissenting views and opinions and also how you treat your minority communities not only the majority. I think on these accounts Sri Lank cannot qualify as a democracy.

How do non-state agencies and the media respond to these situations?

Well the media has undergone a lot of threats and repressive measures. Many journalists have been killed; some have been abducted, threatened and assaulted. Media institutions have been burnt down and many very prominent, independent minded journalists have fled the country in fear. Because of these, there is a kind of self-censorship and the media by and large does not want to write critical things of the regime. So we cannot expect anything much from the media at the moment. Civil society organizations, including local and international groups, face a lot of restrictions. For example we can’t get permission to go into a lot of areas that the government says liberated already. So it’s a mystery! Why people have been allowed to settle in these areas? Why independent media, independent organizations are not allowed to go? It’s very difficult to access these people. And also the government is trying to bring a lot of laws to restrain NGOs. The Ministry of Defence is trying to register and regulate the NGOs particularly in the northern east.

Some foreign nationals have been very helpful in terms of humanitarian and human rights protection work and in last two months three of them have been deported though they had valid visas and permits. So it’s difficult for civil society organizations and media to operate right now in Sri Lanka.

Sri Lanka is taken quite as an example in south Asia in terms of development parameters. What do you think about that?

It is difficult to have any form of sustainable and genuine development if you don’t have basic freedom to express yourself, freedom of assembly and freedom of association. In absence of these freedoms, what you have is a development imposed by the central government with its power. It’s not a form of a participatory development and it will not respond to the needs of the people, when the people who are expected to be the beneficiaries of development and their own representatives are not able to participate in defining what kind of development is going to happen. Development without freedom is a farce.

Do you see any better future for Sri Lanka in the days to come or it’s just bleak?

I think in the short term it’s very bleak and depressing. We might be stuck with this kind of a situation for some time. But I think there has to be collective outrage of ordinary citizens in Sri Lanka. It might come at a particular moment when citizens will say this is enough, we don’t tolerate more than this. And I think for that there is always a need of kind of support and backing from the international community. When I say international community, particularly, I am referring to people to people initiatives and also particular governments which are principled on human rights and international law. They should support the people of Sri Lanka in their search for more freedom and genuine participatory development.

The international community has tried to help to some extent, but what we have been very disappointed is particularly countries in Asia, countries in Africa and Latin America have been very reluctant to stand by the people of Sri Lanka in the hour of need. We found that it’s only a few Western countries that voice their concerns at the massive amount of human rights violations that is happening. Countries in Asia, including countries that have overcome dictatorship like the Philippines, Indonesia, Nepal, Thailand, these are all countries that have seen people’s movements overthrowing dictatorship. They are very silent or they even support the Sri Lankan’s repressive measures. It’s the same in Latin America. Countries like Argentina, Chile, El Salvador which have come through dictatorships and very difficult times, which have seen a lot of enforced disappearance happening, kept very quite. It’s rather unfortunate and disappointing that these countries are not spoken out.

What we would like to see more is countries in Asia, Africa, Latin America supporting people’s struggle for justice and peace in Sri Lanka.

When we think of conflicts in south Asia, in many countries, it is deeply rooted in rampant poverty or poor socio-economic conditions. But in Sri Lanka it’s quite different, isn’t it?

Yes, conflict is Sri Lanka originated clearly on the basis of ethnicity. The Tamil community in Sri Lanka which is a minority in relation to the Singhalese. It’s predominantly a sense of domination based on ethnicity and religiosity that has brought about this conflict in Sri Lanka.

Finally do you have any message to the international community who want to see a better Sri Lanka?

Of course the main struggle has to be raised by Sri Lankan people, but I think international support is also very crucial. When you say international community, it’s very broad and vague. It could mean foreign governments, it could mean Western countries, Asian countries, African countries and it could also mean people to people solidarity initiatives. I think all these are important. People to people solidarity from countries of Asia, Africa, and Latin America is very important. Support of multilateral and international organizations and the UN which have experience in human rights protection and working towards genuine protection of minorities is very crucial. We hope that the UN agencies can play a more proactive and principled role, as well as foreign governments, civil society, people’s groups and people’s solidarity initiatives can offer more principled and more proactive support to Sri Lankan people.

With his amazing products and innovation, Steve did touch, and to some extent, transformed our lives, but despite possesing $8.3 billion of personal wealth and leading a company that worth $39.3 billion, he failed to deeply touch and transform the lives of the most needy and vulnerable people on this planet.
Read more

In Nigeria, data shows that a large number of individuals, particularly in Northern Nigeria choose to join Boko Haram due to poverty, lack of education, unemployment, the willingness to learn more about Islam, and the knowledge that Nigeria tolerates impunity.
Read more