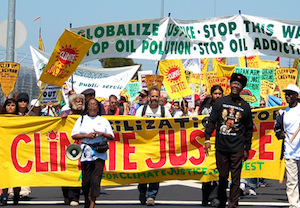 Reading the mainstream media we can easily get the impression that only middle class people are concerned about oil spills and illegal logging and mining, and that it only happens in industrialised countries. However, around the world tribal people are campaigning against these offences too, especially since it is often happening on their land. This article lists today’s 10 most notable environmental justice campaigns from around the world. 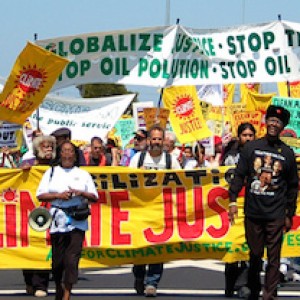 Andhra Pradesh in India has been called the Pesticide Capital of the World. Pesticides cost farmers a lot of money. To recover these costs the fruit and vegetables the farmers produced had to be expensive too. This put them out of reach for many poor families. Not only that, but farmers themselves had been hospitalised due to pesticide poisening. This is why Self Help Groups of poor rural women in 8033 villages decided to help farmers learn to reduce their costs by gradually reducuing their dependence on pesticides. Farmers can support one another, since many in a village change their farming techniques at the same time. Some farmers have seen their profits increase by 100%, and the schemes have gained support from the state government.

Where land is distributed unequally big business can easily get hold of it. This is why Ekta Parishad attribute the inequitable distribution of land in India as a source of environmental problems such as forest loss, nuclear or mining waste, and dams. In 2012 they organised a walk for land and social justice, comprising 100,000 people, and covering 350 kilometres from near the Taj Mahal to New Delhi. This federation of 11,000 community based organisations is dedicated to the principles of non-violent action, and has wings which concentrate on the inclusion of women, arts, and economic alternatives.

‘In Africa, until recently, ecological villages have been the world as most rural people knew it’. The Global Ecovillage Network Senegal seek to combine modern and indigenous knowledge through community based associations. The organisation accredits ecovillages, promotes solar panels, micro credit, internet, cell phones and offer sustainability training to Senegalese people, and ‘opportunities that attract people from the industrialized countries to come and learn from and with Africa, the continent we all originally come from’.

The Green Belt Movement was founded in Kenya by Nobel Laureate Wangari Maathai. It is a network of 4000 community groups who plant trees, protect public spaces, create sustainable livelihoods and climate resilient communities. The organisation provides education for community, environmental and gender empowerment, and engage with policy makers at an international level.

La Via Campesina is an international movement led by small farmers, which popularised the concept of food sovereignty. Food sovereignty is ‘the right of peoples to healthy and culturally appropriate food produced through ecologically sound and sustainable methods, and their right to define their own food and agriculture systems. It puts those who produce, distribute and consume food at the heart of food systems and policies rather than the demands of markets and corporations. Food sovereignty implies new social relations free of oppression and inequality between men and women, peoples, racial groups, social classes and generations.’ The UN has declared 2014 the year of family farm, perhaps inspired by La Via Campesina.

We are often told that people are bad for the planet; that we inevitably cause desertification and erosion, drain water resources and bulldoze wildlife habitats. Sometimes the good news gets overlooked. In Niger, for example many villages now have 10-20 times more trees than 20 years ago. Famers in both Niger and Burkina Faso farmers have restarted to practice traditional agroecology techniques. They look after trees which grew on their land, in order to benefit from services such as shade, food, fuel and nitrogen fixation. Development organisations have caught on, and are now helping too.

Sarvodaya is Sri Lanka’s largest non-profit organisation, and a network of 15,000 villages following nonviolent principles. They are engaged in relief efforts in the war-torn north as well as ongoing development projects. They responded to the 2004 tsunami, by constructing an ecovillage for displaced people.

SEWA is a union of self employed women, based primarily in India, but also Sri Lanka and Afghanistan. SEWA help women improve their livelihoods through technical training, micro-credit, market linkages and natural resource management. One service they provide is loans for energy efficient cooking stoves, which use less wood than the stoves most people have currently. This provides two benefits. Firstly, women spend less time collecting firewood. Secondly, they and their families inhale less noxious smoke; indoor cooking smoke leads to the deaths of over 1.5 million people worldwide each year. Cleaning the air has environmental benefits too.

Survival international is a global movement for tribal people’s rights. They work to help tribal people defend their lives, protect their lands and determine their own futures. Survival International publicise tribal people’s voices and give them a platform to speak, as well as engaging in other advocacy work.

Transition Network supports communities to become Transition Towns. These self-organise to reduce their C02 emissions, and create a healthy culture, which can provide livelihoods and leisure. Transition Towns are found around the world, including in favelas.

Drone Use Soars in Latin America

Notwithstanding all measures put in place, and considering the alarming rate of infection of the coronavirus, the inevitable eventually happened. On 12 March 2020, Ghana Health Service under the Ministry of Health confirmed the first two COVID-19 cases in the country. The cases have since been rising daily with the COVID-19 story yet to end. To this point, Ghana has recorded 46,222 cases of COVID-19 cases with 45,417 recoveries and 299 deaths.
Read more

The Rohingya refugees have suffered problems related to shelter, food, safety, and healthcare from the very beginning, and now the COVID-19 pandemic has further deteriorated their situation.
Read more