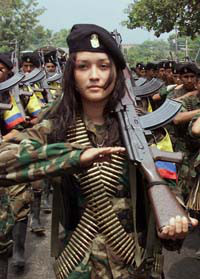 According to the Happy Planet Index in 2012, Colombia is positioned as the 3rd happiest country in the world.

The HPI results, that consider this country among other nations as Costa Rica and Vietnam, are based on three main components: experienced well-being, life expectancy and ecological footprint. But, how come one of the happiest countries in the world is still facing a civil war? And how the experienced well-being is so high, in a country where human rights abuses are so common?

The armed conflict in Colombia represents nowadays a grey area where many have things to say and just a few of those things are actually relevant. In fact, to start talking about what is really happening in this South American nation, it is important to say that even if there are on-going peace processes and demobilizations of different insurgency groups, battles between the forces and military actions are still a reality. In Colombia, the transitional justice process has been developed before the conflict is over.

In August 2012, under the President Juan Manuel Santos Administration, Colombia started for the 3rd time, a Peace Process between the government and the Revolutionary Armed Forces of Colombia (FARC). The conversations between the guerrilla group and the state, held in Norway and Cuba, have produced different reactions among the civil society, most of them positive and optimistic about the country’s future.

Nevertheless, the Colombian civil conflict involves more actors and enemies than those present in the negotiations. Guerrilla groups (FARC being just one of them), paramilitaries, security forces and bacrim -emergent bands closely related to the drug trafficking- continue to be responsible for crimes under international law, including massacres, abductions, enforced disappearances, and forced displacement.

As in many other countries, children have had an important role in war. They have not only been enrolled as soldiers in a conflict that started way before they were born, but they have also been used as messengers, intelligent forces and sex slaves, among others. According to different NGOs worldwide, at the beginning of 2012, more than 14.000 children were involved in the Colombian conflict as members of the armed forces. But, what is the reality of child soldiers in Colombia nowadays? How is the country addressing the problem? And which challenges will it have to face?

Children are being employed in the Colombian conflict by all the different armed forces. They are not only being recruited by the guerrilla groups, but also by the paramilitary forces and the state agents. Child soldiers are enrolled as combatants, messengers and spies; some of them are actually being used for the discovery of anti-personnel mines and even in the drug business which is closely related to the armed conflict in Colombia. The 2012 report by the Instituto Colombiano de Bienestar Familiar (ICBF) and an investigation conducted by El Tiempo, the biggest national newspaper, shows that “at least 100.000 children and teenagers are related to different sectors of the illegal economy, directly controlled by insurgents and criminal organizations”.

As soldiers, children and adolescents are forced to take up arms and face the enemy. After being militarily trained, they participate in armed clashes and massacres. They become members of the insurgency with the same amount of duties as adults, but with a restricted amount of rights among the forces. In this way, they grow in a warlike atmosphere, knowing conflict as their only way to survive.

As messengers and spies, child soldiers are used by all the different forces to pass information among the troops, and to gather intelligence details from the enemy. Children are used mainly as messengers and spies, due to their ability to pass unnoticed. They are recruited not only by the guerrilla groups, the paramilitaries and bacrim, but also by the national security forces. In fact, one of the biggest critiques to the Colombian Armed Forces is the use of children as informants during the civil conflict. As was mentioned in 2012 by the NGO Colombian Coalition Against the Involvement of Children and Youth in Armed Conflict, the army pledged not to recruit child soldiers, but is still calling them to inform them about the armed groups and the drug business.

Human rights abuse against children and youth, and their use as elements of war, characterizes a dark era of the ongoing conflict. The use of minors as instruments of war is a despicable, but a widely used technique practiced in many conflicts occurring in different parts of the world. At this point, the Colombian example becomes relevant, since it recognizes the threats that it carries and the visibility if the problem. As the ICBF Report shows, during the ongoing peace process and demobilization- recruitment of child soldiers in urban areas is 17 times more common than four years ago.

“Death penalty against the guerrilla bitches of the FARC who are opposing the policies of our government”(Black Eagles Capital Bloc, a group of paramilitary forces active in urban areas, sent this statement via email to a number of NGOs on 19 June, 2011.)

The role of girls in this civil war has been wide and difficult to address. They have not only been used as members of the military forces, but they have also become sexual slaves and support staff. In some cases, women are separated from their families and held hostages before they turned 18, and then became maids and servants of insurgents. In others, they join the forces as soldiers and fight against the enemies as men do.

In the first case, girls grow in an environment where their education is being denied and their role is limited to the subsistence economy of the armed forces. In this way, even inside the guerrilla and paramilitary groups, equity and egalitarian participation is limited by the superior role of men. As Arturo Escobar said, “women have been the ‘invisible peasants’ or, to be more precise, visibility of women has been organized through techniques that consider only their role as reproductive individuals”.

See Also:   Development in Nepal: Jeopardized by 23 Governments in 24 Years

In the second case, women are trained as members of the armed groups, forced to hold guns and to fight in the front line, among other members of guerrilla and paramilitary groups. In this way, girls become perpetrators and victims at the same time; an important element to take into account since the amount of women used by the armed forces has been increasing over the years. As the Report done by the ICBF says, 47% of the minors recruited in Colombia are girls. But they are also separated from their families to become sexual slaves, as part of the exploitation of children in the Colombian armed conflict. As the 2012 Annual Report of the NGO International Tribunal over the Children affected by War and Poverty shows, armed groups use girls as “girlfriends”, they rape them, force them to have miscarriages, to become prostitutes, to be mutilated sexually, and to become slaves. All these atrocities undermine the role of women in society and interfere nowadays with the reconstruction, reparation and reintegration processes in the country.

In a different scenario, rapes of under-aged women and the use of girls as sex slaves have become, for some tribes in Colombia, a kind of genocide that is difficult to address and represents a threat to the country’s multidiversity. Abductions, disappearances and displacements are also threatening the survival of minorities in the country, as they represent a menace to vulnerable groups.

In fact, human rights violations against minority girls are considered as one of the biggest challenges in Colombia, as menaces against these populations are double. As is mentioned by Muñoz Vargas in 2005, “in Colombia, violence against indigenous and Afro descendant girls, for gender related reasons, has worsened the situation of minorities, making them the main victims of forced displacement and the subject of racial discrimination and vulnerability”. All and all, it can be said that the role of girls in the Colombian conflict is difficult to address and represents a major challenge to the current Administration. Not only policies of reintegration are enough, initiatives for gender equality and human rights protection are a must. Furthermore, it is necessary to start a cultural change that addresses the role of girls and women in society, in order to assure a kind of social development that “meets the needs of the present without compromising the ability of future generations to meet their own needs” (BRUNDTLAND REPORT, 1987). (>> Continue Reading)

Kenya, endowed with plethora of cultural riches,heritages,history, customs and traditions has various instruments that can be used to influence and win the hearts and minds of foreign nationals to help support Kenya’s policies, values and demonstrations in regional, continental and global affairs.
Read more