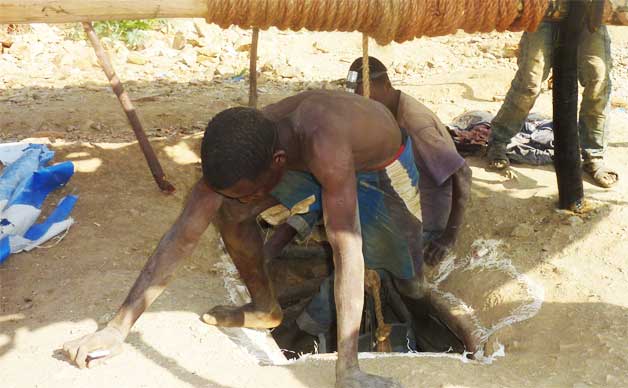 In Tanzania, gold is a billion dollar industry representing 21.5% of total exports with a worth of approximately $1.37 billion. The business is very much booming, split between large-scale mines run by multinational corporations and smaller independent ‘artisan’ mines. Many communities are dependent on artisan mining as a source of income, but dangerous working conditions, chronic health problems, and unfair pay is an ongoing problem.

Children are often attracted to mining due to a lack of regulation and the promise of easy money. As a result, thousands of children in Tanzania work in difficult and dangerous conditions for little money in which their education, safety and wellbeing is compromised.

Child labour is a recurrent problem in Tanzania with 29% of the total child population participating in these activities.  Child miners are also most at risk of physical and psychological abuse than any other industry that employs children.

Although efforts have been made to fight child labour in Tanzania, the practice still exists, mainly in agriculture, mining and construction sectors. The Human Rights Watch 2013 report on the ‘Life of Child Gold Miners’ brought this issue into the mainstream media but it has since fallen out of the spotlight. Children are still heavily involved in this dangerous industry in which their rights are exploited. Stories in the media often cover ‘official’ mines run by multinational organisations, but miss the forgotten stories of artisan miners.

As the sun rises casting long shadows across the African plain, 16-year-old David strolls calmly across the arid landscape making his daily journey from the village to the local mine where he works. With a bucket in one hand and a rusty machete in the other, he explains what attracted him to the mine from such a young age: ‘I started mining when I was 12. I started because I was looking for money. My parents are not aware that I go there, but I sneak there to work’.

Motivated by the lure of money, David’s story is very typical for young men living in rural mining communities in central Tanzania where employment opportunities are scarce. For young and old alike, the dangers of working in independent mines are many, including a lack of health and safety regulation, the absence of proper tools and equipment, disease and very low financial reward.

You May Also Like: Hit the Hardest: the Children Orphaned by Ebola

Michael is a local teacher working in a rural Tanzanian school who explains the impact mining has on education as children in pristine blue and white uniforms sweep the dust off the courtyard around him:  ‘Most of the young people in this village have been married with the environment. Most of them claim that there is not any other opportunity to find money other than to go and work in the gold mine’. 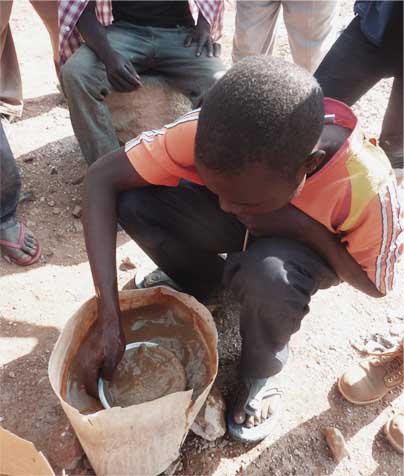 This is a common problem in areas of low economic status, where poverty is the norm and young men are understandably drawn towards any promise of money as there are not many other sources of employment.  ‘There are still many young people who do not have a light for their future. These are people that are involved only in farming and mining activities. This happens because life here is very tough, some young people’s parents fail to pay for school, which leads them to decide to go into these activities’, adds Michael.

The backbone of many communities in central Tanzania is farming and minerals, but a lack of enforcing laws means that many children see mining as a way of making enough money to survive. In official mines, it is rare to find young people due to the regulations put in place by the multinational corporations, but in the independent mines, there are a plenty.

The sad reality is that the amount young people earn through mining is still too low to pull them out of poverty. The people who benefit from extracting gold are the buyers and the mine directors, not the young men working there. Young people are often not treated fairly in the mine, as they are easily satisfied with any amount of money and do not usually get a fair price for their gold.

For the young and old alike the dangers of working in a mine are many, including the lack of health and safety regulations and proper tools.

David completes his 2 mile walk to work and reaches the mine, a sprawling metropolis of tin roofed shacks and tarpaulins springing out of the dusty plain. A constant hum of generators can be heard in the background, and in a community with zero access to water, a thick rubber pipe spurts an unlimited supply into the work area.

Women in bright colourful dress kneel down next to bubbling pots as they roll chapattis, a thick cylindrical grinder chews up rocks noisily nearby as metal slides lead into a pool of murky brown water as part of the gold screening process. A group of shirtless men shout in Swahili as they remove a tray of wet material, and a two children no older than 8 pass by weighed down by the pick axes in their hands.

The shafts themselves fall out of nowhere, crude gaps in the earth that plunge deep into darkness, a basic wooden structure overhead allows for buckets and people to be lowered by rope into the mine.

The shafts are dug by hand with basic tools such as pick axes, the work is slow and tough, with the dust and chemicals found in water pumping machinery known to cause sickness. The mines are often unstable and sudden collapses are not uncommon.

David explains that the miners sometimes use children to get through the small holes in the shaft to help dig or find more gold. ‘I am sometimes a little bit scared, as the chambers are very deep. My parents are aware and allow me to go, although they are still unsure,’ he adds.

Another problem is the effect that working in the mines has on young people’s education. In some cases children end up dropping out of school altogether. ‘The gold mine can have a negative influence on the attitude of children here. They do not see the long-term importance of education. They see their peers with money from the mine, which influences them to stop attending and go and work there to find money’, Michael explains how the industry has affected education.

You May Also Like: Persons with Albinism (PWA): Ghosts of Tanzania

The lure of money is an easy choice for young men from poor rural families even at the expense of education. Joachim, 14, explains his situation: ‘I am always working in the mine. I started working when I was 10 years old. Right now I am not studying, as most of the time I am at the mine. For me I think money is better than going to school, that is why I spend my time there’. Most young people that fail to attend in Michael’s school are involved in mining as they feel this is the only opportunity to make money.

Of course, in areas of extreme poverty the solution is not simple as young men are expected to help provide for their family. In these conditions the long term benefit of education may seem very far away.

The Tanzanian government does have strict laws to prevent children working in mines, and the recent policy ensuring free education has reportedly had positive effect on reducing child labour. Previously, school fees often resulted in a lack of attendance and children finding employment elsewhere.

However, the problem still remains as thousands of children in Tanzania continue to risk their safety to work in a mine. Steps must be taken holistically taking into account both the enforcement of regulation and support and awareness to the mining communities themselves. The key may lie with community leaders, parents, local NGOs and influential people working together to create positive opportunities in their community to keep children away from the dangerous employment at goldmines.

You May Also Like: Child Labour in India: The Missing Data & The Informal Economy

The situation is undoubtedly a symptom of poverty in which a lack of opportunity forces young people to participate in risky activities for small reward. The solution should be long-term and should be aimed at improving livelihoods, education and prosperity of marginalised communities. Nonetheless, small steps can be taken by people like Michael.  ‘The children of this village need inspirational people, to show the importance of education. The possibility of them succeeding in the mine is very low. We have been working there for a long time but still don’t have much, things must change’. That’s what Michael explains himself.

(Tony is a Humanitarian professional who has worked on multiple responses across Africa, Southern Europe and the Balkans. He holds a degree in International Relations and Philosophy. )

The Duterte administration has assigned former military generals to deal with Covid-19 and has sent police Special Forces to contain communities.
Read more