Belief in witchcraft must stop if PWA are to be safe in Tanzania. Tackling poverty and providing education are the only defenses we can use to protect victims of these horrific crimes.

Branded “ghosts” because of the lack of pigment in their skin, many Persons with Albinism (PWA) in Tanzania are often isolated from communities and discriminated against, but not being socially accepted is the least of their worries.

In Tanzania and in other African countries, if you are a PWA you are likely to fear for your life. Albino colouring is akin to walking around with a dollar sign above your head.The limbs of a PWA are worth a high price, in an alarmingly fast growing industry, where they are sold to witchdoctors, who claim they bring good luck.

Albinos are also more likely to be unemployed, considered the curse and shunned from communities because of discrimination and thus suffer from poverty and parents may even abandon their child (Tanzania Human Rights Report 2012).

In December last year Tanzania banned witchcraft, as they are attempting to stop tragic horror stories such as attacks and kidnappings on these individuals. However, with 60 percent of Tanzanians still believing that witch doctors have the ability to cast spells, Public perception plays a huge part in the Isolation and prejudice against PWA.

PWA is a genetically inherited disorder where both parents carry the albinism gene which is passed onto their child, occurring in both genders and every racial and ethnic group. PWA of African descent usually has yellow hair and cream colored skin with hazel or green eyes (Scott 1999).

The condition is characterized by a lack of pigment in the skin, eyes and hair which results in vulnerability to sun exposure and bright light. Also almost each individual is visibly impaired and most are ‘legally blind’.

The disorder is uncommon; occurring in 1 in 20,000 births in Europe and North America. In Sub-Saharan Africa it is more frequent, with 1 in 2,000 having the disability (Abella, R). Few people have had contact with the disability and even less have knowledge of its medical basis and the inconceivable challenges they face.

With high poverty in the country, 43% of the population lives on $1.25 a day (The World Bank Group, 2015) making education a luxury. Due to their lack of vision, children with albanism are not likely to have much social contact with other children (Scott 1999). These children will not have the happiness of friendship.  Being alone also makes them an easy target, as they are isolated, therefore especially vulnerable. 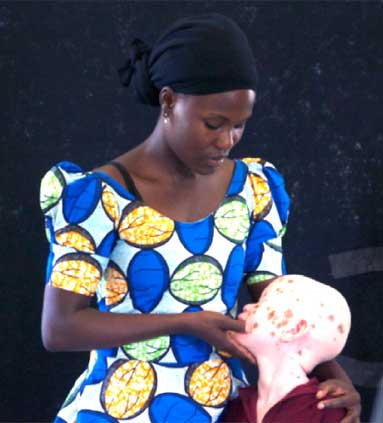 The sun is another major threat. With a heightened risk of skin cancer, due to the lack of melamin in their skin (Scott 1999). Making it a necessity to cover up from the suns rays, however there is a lack of low vision aids and sun protection, due to a lack of funds.

In Dar es Salaam on 3rd March this year, Tanzania Albinism Society was set to hold a peaceful demonstration against attacks and murders of PWA. This was cancelled by the police, which led to concerns over whether authorities in the country are not committed to ending violence against PWA. Particularly, with the upcoming elections government officials are not willing to speak with protesters for fear of alienating many voters. This could result in an increased lack of safety and increase in related crime. The government is known to keep quiet about incidences of violence against these individuals.

75 PWA have been killed in Tanzania since 2000, according to UN estimations. UN officials have spoken about their fears that attacks will rise with the upcoming Tanzanian presidential election since politicians seek good luck from witch doctors.

Not enough is being done by the Tanzanian government about the situation for PWA in the country and the international community is not adequately aware of their plight. It is unacceptable that this stigmatization is occurring and these persons live in fear each day.

Belief in witchcraft must stop if PWA are to be safe in Tanzania. Tackling poverty and providing education are the only defenses we can use to protect victims of these horrific crimes.

International awareness must be made about this issue to tackle the situation as the international community has to speak out against the killings and provide asylum to those searching for safety (Whittaker 2011).

The Post-MDG Agenda: Why Keep Spending in Education?

Child Soldiers of the 21st Century: What Can be Done About Them?

After armed groups in South Sudan recently released over 200 child soldiers, now is the ideal time to explore why more needs to be done to prevent children's lives being corrupted by violence.
Read more