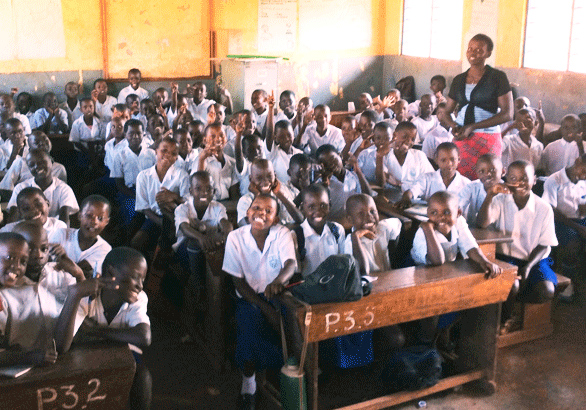 Uganda was the first country in sub-Saharan Africa to introduce Universal Primary Education in 1997. One of the greatest achievements of UPE was the substantial increment in primary schools enrollment from around three million to over five million children in 1997 to today’s over eight million. The Universal Primary Education (UPE) program was introduced in order to improve the enrollment and attainment in primary schools.

The programme  was initially implemented to provide free education for four children per family, but it was not performing well due to a complex structure of Ugandan families. Since most Ugandan families have more than four children, they started sending every child to school. That, of course, resulted in a rapid increase in the number of student enrollment in primary schools. As a result President Museveni announced that the UPE was open to all children of all families.

UPE is deemed free, there are several hidden costs which make the programme not absolutely free and at times out of reach for poor parents.

When the new policy was executed, schools experienced a massive influx of pupils and the demand for learning materials, teachers, and infrastructure became a challenge to the educational system. The UPE programme resulted in costly consequences, including but not limited to a poor quality education, low pupil achievement, untrained teachers, improper infrastructures and classroom settings.The same programme also saw education taking the lion’s share of the national budget, coming off the 7% in the 1990s to over 15% today.

Kenyan government introduced Free Universal Primary Education in 2003. According to Kenya Demographic and Health Surveys, among children ages 6 to 13, enrollment improved from 87 percent to 94 percent between 1998 and 2009. In Kenya, education takes the largest share of the national budget. In 2013, just over 17 per cent of government expenditure went to education.

See Also: The Post-MDG Agenda: Why Keep Spending in Education?

In both Kenya and Uganda massive investment of billions of shillings has been done to achieve this. But save for all this; pressure is mounting on the infrastructure and human resources, due to increasingly high enrolment every other year.

There have been cases where students had to buy a bag of cement, toilet papers and brooms for their school.

In Kenya, the funding for primary education is pegged at 1,020 KHS per child per year. In addition, there are other indirect contributions like constituency bursary. The government also pays teachers’ salaries, builds classrooms and provides stationery materials.

See Also:   What the end of DFID means for international development?

The government of Uganda, on the other hand, invests 7600 UGX per pupil per year in capitation grant of the UPE programme. In addition, like Kenya’s government, it also pays for teachers’ salaries and builds infrastructure.

However such a huge investment doesn’t seem to be paying off since it is unable to  keep a child in school for a whole academic year.

Some key features of UPE programme in Kenya and Uganda

As far as Universal Primary Education and absenteeism is concerned, it has been observed that:

The fact that parents do not pay directly for public schooling detaches them from the schools. Unlike the old days when parents were more actively involved in the financing of the schools, FPE created the perception that the schools belonged to the government and not the local communities.

Though in both Kenya and Uganda UPE is deemed free, there are several hidden costs which make the programme not absolutely free and at times out of reach for poor parents. Students are required to pay examination and photocopy fees plus extra cash for the teachers’ upkeeps to motivate them. Students also pay for school uniforms, lunch or have to provide posho and beans for school meals. There have been cases where students had to buy a bag of cement, toilet papers and brooms for their school.

There are those who, despite having paid full school fees, are sent away because they have failed to pay tuition or remedial fee, yet this has been outlawed by both governments. There are cases where students who fail to make book donations to schools are sent away. While the governments decreed that students should not be sent home for lack of school fees, the opposite prevails on opening days and every end of the month.

See Also:   The Post-MDG Agenda: Why Keep Spending in Education?

The forward and a Few Recommendations

The current ratio of teacher to pupil is 1:110. This is extremely high and not conducive to proper learning and good standards.

Given the high cost of living, unemployment and meager resources, both Kenya and Uganda have kept many promising learners at home. The only way to ensure the quality of education peaks is to live its talk. Students from poor families who form the majority in Kenyan schools spend the better part of the year at home because their parents cannot meet school demands. The free aspect of education can only be felt by controlling the numerous levies that lock out many students from the very poor.Free education is a concept that is only free on paper, but the reality is, education in Uganda and Kenya is expensive.

Last but not least, even though UPE has its own weaknesses it has been hailed globally as a wonderful programme, a reflection of political commitment to education for all, and a role model of how the poorest countries of the world, such as Uganda and Kenya can eliminate widespread illiteracy and develop their human resources by providing an affordable education.

“These are exciting times to be young in the developing world”

When many of her friends and colleagues were busy setting up their ambitious careers in big multinational companies,...
Read more

LONDON, September 2011 - It is not often a technology guru will say, “Forget...
Read more