With the deterioration of the security situation in Afghanistan, how feasible the Turkmenistan, Afghanistan Pakistan and India (TAPI) gas pipeline project will be?

The electricity pylons that transmit electricity from Tajikistan and Uzbekistan to light major regions of Afghanistan were blown up by extremists who operate in the northern region. The darkness in Kabul continued until the Afghan National Forces battled the insurgent group for more than 20 days to recapture the area and restore the electricity pylons.

On top of the electricity problem there is another challenge the residents of Kabul have to grapple with: disruption in access to the Internet due to fibre cable breakdown of Insta Telecom- a major internet service provider in Kabul.

Call it a new warfare technique/strategy or deterrence instrument, the extremists do not cease to exploit the disadvantages/or vulnerabilities of the government to enrage the National Unity Government team & inflict social and economic costs to the Afghan society. According to a startling report by AFP, the Taliban have demanded a “protection tax” in return for no-damage to telecom companies present in Taliban stronghold areas. The demanded “protection tax” equals to 10 % tax collected by the government. The telecom companies should pay 10 % of protection tax in order to keep their service running in areas controlled by the Taliban.

See Also: Who will win the Power Struggle for Tajikistan in the Central Asian ‘Great Game’?

Extending their reach and targeting private companies to finance their war puts a serious question mark on their intentions for the much expected peace talks. These harsh realities therefore pose the imminent question: can the government ensure the security of mega investment projects such as the TAPI gas pipeline?

With the deterioration of security situation in Afghanistan how feasible the Turkmenistan, Afghanistan Pakistan and India (TAPI) gas pipeline project will be?

The project, named after countries Turkmenistan, Afghanistan, Pakistan and India, TAPI will play a vital role in revitalising Afghanistan’s prominence in the region, but only if the project gets completed. The pipeline will be designed to carry 33 billion cubic meters (bcm) of Turkmen gas annually. Both Pakistan and India through state-owned companies would purchase 42 % of that volume (13.8 bcm) each. In the meantime, Afghanistan would purchase 16 % of the gas amounting to 5.11 bcm. In addition, Afghanistan will be entitled to receive a transit fee 400 million for the use of its territory from each of the other TAPI buyers. 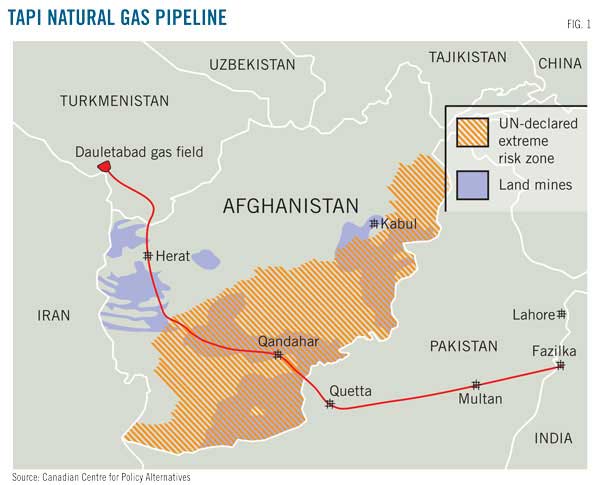 According to the Afghan Ministry of Mines and Petroleum the pipeline is expected to be 56 inches in diameter and will have a working pressure of 100 standard atmospheres (10,000 kPa). The initial annual capacity will be 27 billion cubic meters (bcm) of natural gas. Thereafter the capacity will be increased to 33 bcm. The pipeline would run for nearly 1,735 km, including 735 km across Afghanistan and another 800 km through Pakistan. Gas will be drawn from the Dauletabad gas field, the pipeline will enter Afghanistan to pass through Herat, Farah, Nimroz, Helmand and Kandahar and the Pakistani cities of Quetta and Multan, before reaching India at Fazilka in the northern Punjab province.

In a recently published booklet by the office of president of Afghanistan the two projects TAPI and CASA 1000, are considered as sources of “Transformation of Afghanistan” expected to boost the national economy and create jobs. These two projects are at the top agenda of Unity Government for the country’s economic self-reliance.

On the day of the signing ceremony and days after people held celebratory rallies and welcomed the project across the country, pictures of some rallies which were shared on social media, one could see from the dressing that the rallies were organized by the government to show public support.

On the day the Multi-billion gas project was being signed where it met with public rallies and tremendous threading on social media the Taliban affiliated account on twitter, on 13 December, posted Sabiq Jihadmal ‏@Sabiq_JL  “#TAPI Project was signed 17 years ago between Islamic Emirate and Turkmenistan Govt, that was the starting not today.” And in second tweet he wrote: “90% of TAPI will pass in (through) territory under control of the Islamic Emirate, I don’t know from which address insane Ashraf Ghani is there”.

It’s true that the Taliban never opposed the TAPI project and during the 1990s, their involvement to negotiate with the US company Yonical, to provide security guarantees for a similar pipeline is a historical fact. The Afghan Government is indeed convinced that the Afghan Taliban does not oppose the TAPI project, as it is important for the financial stability of Afghanistan and, therefore, none of the groups intend to hamper the project. But it’s questionable under what conditions the Taliban will ensure the pipeline’s security?     (Continue Reading >>)

José Manuel Ramos-Horta: “We resisted the temptation of violence”

"We never resorted to extremist tactics like kidnapping and killing innocent civilians; we had a very strict code of conduct that never allowed us to descend to the barbarity of the other side", says José Manuel Ramos-Horta, a freedom fighter, Timor-Leste's ex-president and a Nobel laureate.
Read more

Alternatives to immigration detention: Council of Europe and UNHCR launch a new course

Ahead of the World Refugee Day, the Council of Europe is launching a HELP/UNHCR...
Read more

By Bak Hyejin Education can be regarded as a crucial factor for the development of capabilities as well as human development. A review of Amartya Sen's seminal work Development as Freedom.
Read more