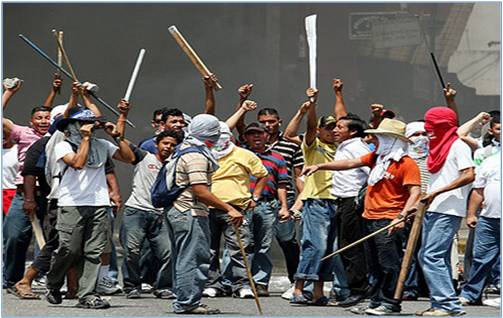 A HUMAN RIGHTS AND SECURITY ABYSS

Since the US- and Canadian endorsed military coup of June 28, 2009, that ousted the democratically elected government, hundreds of pro-democracy activists have been killed by the State or death squads. Honduras has become known as:

“[Honduras] is quickly turning into a disaster zone. … To make matters worse in Honduras, there are indications that elements of the U.S.-backed government are complicit in the violence and criminality. … The murder rate of 82.1 per 100,000 residents … gives Honduras the highest homicide rate in the world.”

“It’s time to acknowledge the foreign policy disaster that American support for the Porfirio Lobo administration in Honduras has become. Ever since the June 28, 2009, coup …, the country has been descending deeper into a human rights and security abyss. That abyss is in good part the State Department’s making. … According to the United Nations, it now has the world’s highest murder rate, and San Pedro Sula, its second city, is more dangerous than Ciudad Juárez, Mexico, a center for drug cartel violence. Much of the press in the United States has attributed this violence solely to drug trafficking and gangs. But the coup was what threw open the doors to a huge increase in drug trafficking and violence, and it unleashed a continuing wave of state-sponsored repression.”

This situation of repression and violence has gotten even worse. On May 11, 2012, a US-DEA (Drug Enforcement Agency) raid in the Ahuas community of north-east Honduras left at least four innocent people dead, including two pregnant women; many more were wounded.

See Also:   A Post MDG World - Why we need a more holistic approach to development

EMPOWERING AND LEGITIMIZING THE ILLEGITIMATE

While the United States receives most attention regarding its support for the military backed government of Honduras, Canada has played a major role in empowering and legitimizing the regime.

In August 2011, Canadian Prime Minister Harper became the first foreign leader to actually visit Honduras since the military coup. (Most governments in Latin America today still do not have full political and economic relations with the military-backed regime). Leading a delegation of politicians and business executives, Prime Minister Harper signed a “free trade” agreement with the regime that gave international credibility to the regime and that further entrenches the rights of Canadian maquiladora (sweat-shop), tourism and mining businesses and investors in Honduras.

DARK TUNNEL OF VIOLENCE AND REPRESSION

North Americans must pressure and keep on pressuring our elected politicians and government officials. Public pressure on and shaming of North American governments and businesses is vital if we are to stop empowering and ‘legitimizing’ the illegitimate Honduran regime.

It is equally important to support (with funds, human rights accompaniment, solidarity delegations, etc.) civil society groups in Honduras – many of which are members of the National Resistance Front – that are courageously struggling to denounce the abuses and human rights violations, all the while working to restore their democratic order and to re-found the State and society.

Despite this situation, there is a chance for positive political change in 2013. The wife of the militarily ousted President Zelaya has been chosen as leader of a new political party – LIBRE. Whereas many Hondurans, now in the National Resistance Front, were not Zelaya supporters before the coup, they have been moved by the dignified and courageous positions that both Mel Zelaya and his wife Xiomara took, since the day of the coup.

The 2013 presidential elections will pit corrupted pro-coup, pro-oligarchy parties (likely to be backed openly or indirectly by the US and Canada) against the LIBRE party that has grown out of civil society’s courageous opposition to the military coup and on-going repression and out of the desire of a vast majority of Honduran people to re-found their State and society and restore a truly democratic order.

LIBRE would easily win truly democratic elections, given the chance. However, these elections will undoubtedly be characterized by electoral corruption and threats and repression against people aligned with the LIBRE party.

This is at once a struggle for democracy and human rights in Honduras and across Latin America. It is also, deeply, a struggle for North Americans to hold our governments, companies and investors to account for ‘legitimizing’ the illegitimate, for empowering a repressive and undemocratic regime.

Hunger in the Desert: Famine in Somalia

By MOHAMUD HASSAN The fate of the toddler girl, until today, is still unknown. The...
Read more

For decades, foreign hands have just messed up many things in the DRC and virtually robbed the country, it’s now time that the people of DRCongo decide their fate themselves and use their mineral resources wisely for the benefit of all Congolese people.
Read more

It is also important that Nepal's central as well as provincial governments extend support, both financial and moral, to pandemic-affected Nepali citizens, especially to the foreign returnees, to capitalize on their skills and expertise which they have gained from overseas employment.
Read more

See Also:   Conflict in the DR Congo: A Reflection From The Field.