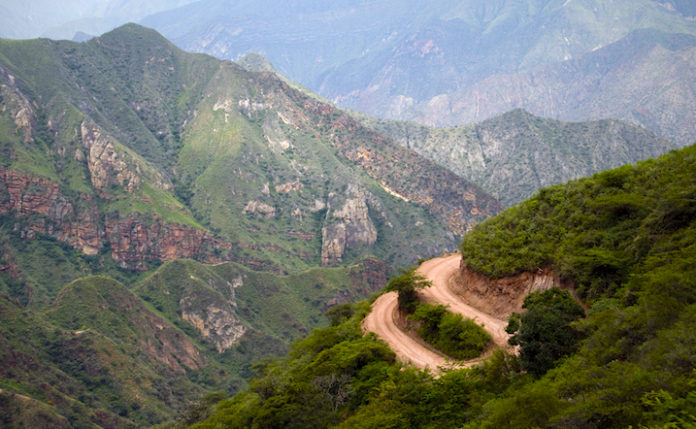 From La Balsa to the Peruvian border it’s a slow, two-hour drive through the edge of the Amazon. The road’s unpaved, prone to landslides, and floods often during rain season – the time of our crossing.

Ania and I flagged down a southbound truck near the bus station, threw our bags in the back, and jumped in front with the old man at the wheel. There was heavy raining and yellow water filled the potholes along the red clay road.

“So, where are you from?” Ania asked the driver.

“Everything costs more now,” the old man said. “Let me tell you, a liter of cooking oil used to cost eighty cents. Now it’s two dollars. Do you know what kind of impact that has on a family? It’s all Correa’s fault.”

“Correa? The president changed the price of cooking oil?”

“Ever since he got elected, the price of everything’s gone up.”

“But food costs more all over the world,” I said. “Gas prices are up so that means transportation costs are up and we, the consumers, pay the difference.”

“Bullshit! Esto es una mierda!” the old man yelled. His face red as the crooked road that tossed our bodies around the truck cabin. “We produce five million barrels of oil a day in this country. A barrel of oil costs $100. Tell me, how much is five million multiplied by a hundred?”

“Correcto! Five hundred million dollars a day is what we’re making in Ecuador just from oil. And where the hell is all that money? When will it be spent for the people en los pueblos? We’re the ones that need help.”

“Didn’t Correa put a lot of money in education and health care, though?” Ania asked.

“Some, but who knows if it ever gets there. Por ejemplo, let me give you an example, look at this road we’re driving on, this muddy mess of potholes, es pura mierda! We have landslides and accidents all the time here. Look at those crosses over there.”

He pointed at a cluster of white, painted wood crosses on the edge of the road.

“That was a bus. Sixteen people died when it went rolling down the mountain.”

“Two months ago,” the old man said. “But here’s the best part, when Correa got elected he said he’d put aside one million dollars a year to fix this terrible road. But look at it! You see it, right? It’s still mud. It’s been years now and it’s still mud! Where are the one million dollars a year going? Not here, obviously. The greedy politicians in Quito are keeping it all.”

“Here in Ecuador,” he continued. “We have more corruption than we have money. That’s the truth and that’s why life is so expensive for the rest of us, those of us without brothers in the government.”

The truck took a quick turn around a rocky bend. Ania pressed my body against the passenger door and I could see into the green canyon below where a violent river ripped trees from its banks and swallowed them whole in its thick, chocolate milk rapids.

“But Correa is better than your recent presidents, right? Ania asked. “Maybe this road isn’t good, but all the other roads we saw in Ecuador were brand new. Correa is creating some progress in this country isn’t he? ”

“No, son todos chanchos, they’re all pigs and they’re all corrupt. It’s always the same. I’m tired of all these politicians talking about hope and change. They always say that crap and then they screw us. Correa’s just like everyone else.”

“Have you liked any of the presidents you’ve had in Ecuador,” I asked.

“Yes, Aguilera. He was the only good one.”

“Aguilera? When was he in office?”

“In the early eighties. He said the future of Ecuador was in the Amazon and we would use our resources here to pay off our national debts. He wanted to industrialize the country. He was going to make us into a profitable nation and raise the standard of living. In the twenty months that he was president he was able to pave the road from La Balsa to Zumba so Ecuadorians in the amazon could have easy access to the rest of the country.”

“Why was he president for only twenty months?” I asked.

“Lo Mataron. They killed him and his entire family. That’s what happens when you really want to change things in Ecuador.”

We reached the Peruvian border, got out of the truck and got our passports stamped. The custom’s officer played with Ania’s golden hat and asked if he could keep it. She said no.

When we got back to the truck, the old man told us he’d stay in town for a while so we said our goodbyes and crossed a bridge over another brown, violent, jungle river and entered Peru. After so many years of injustice, faith can sometimes feel like a foreign language in Latin America.

Drone Use Soars in Latin America

Over 10,000 health workers infected with COVID-19 in Africa, says WHO

In many African countries, infection prevention and control measures aimed at preventing infections in health facilities are still not fully implemented.
Read more

Cuatro Nicas: A Photo Essay on Life in Post-War Nicaragua

by Diego Cupolo Nicaragua is the second poorest country in the western hemisphere. The governing political party,...
Read more

COVID-19 has constrained many of the ongoing SDG-readying support provided to the Government of Afghanistan and may have major implications for judicious and long-term development policymaking and programming that are needed to achieve the priority SDG targets in Afghanistan.
Read more