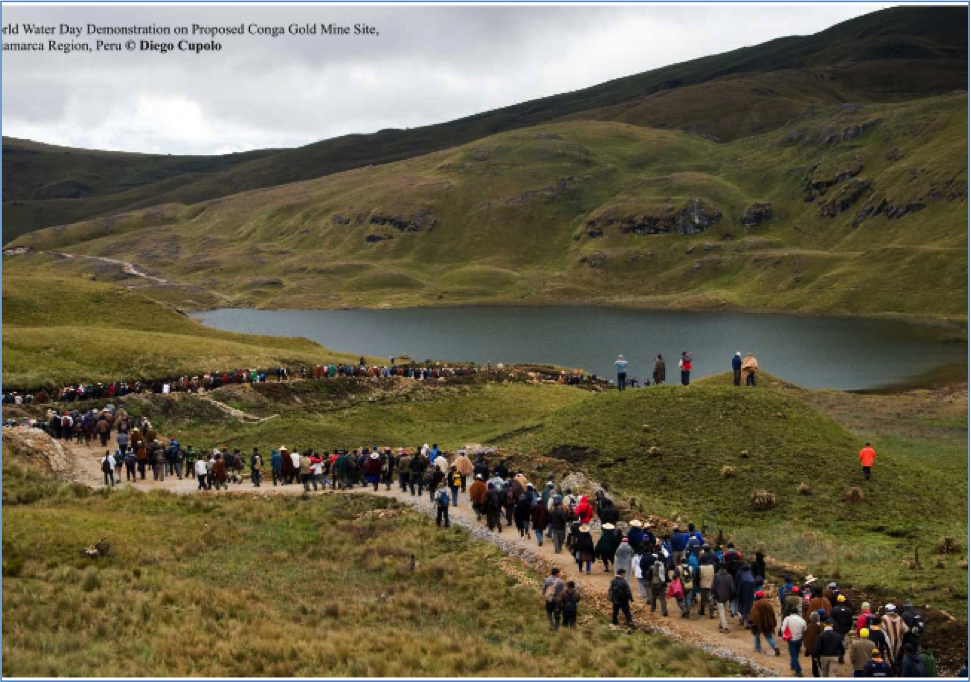 “Conga [mining project] will go ahead with or without social license” – announced Peru’s Prime Minister in early June, after more than a year of intense disputes between the national government and the regional government over the viability of the US$4.8 billion mining project in Cajamarca, northern Peru. The case of Conga project continues to dominate the national headlines while remaining indefinitely suspended with no clear indication of how this conflict will be resolved.

In the past two decades the Peruvian economy has experienced continued economic growth. This has been boosted by the rise of the mining industry, which comprises more than half of the national GDP. Paradoxically, this achievement has been followed by a considerable increase of social conflicts, mainly related to extractive industries, which operate in territories that serve as a source of livelihood and cultural meaning for local communities. This dynamic has gradually de-legitimized the political system, diluted confidence in the central government, and created a governance deficit.

After 21 years of neo-liberal governments, left-leaning leader Ollanta Humala took office in July 2011 amidst huge popular support. His message of preferring water over gold during his campaign won a large number ofsupporters and raised hope for change among rural communities.

At that point, the Regional President of Cajamarca, Gregorio Santos, who publicly supported Humala’s campaign, had a flexible position towards mining, acknowledging the economic benefits it brought to the region. The Conga mining project’s viability faced no major problems, however, the idyll did not last long. A series oferrors committed by the Executive and the mining company transformed Santos into their main opponent, making Conga the first litmus test for Humala’s left leaning government.

See Also: Oil and Oxygen: Are We Suffocating the People of Peru?

The political scenario Peruvian law dictates that a mining project with an Environmental Impact Assessment (EIA) approved by the Ministry ofEnergy and Mines is legally viable. However, the legality of an approved EIA is not enough to put forward a project. Legitimacy needs to be upheld by all stakeholders, especially in a highly fragmented scenario where the central government—which concentrates all decision-making powers over mining policy—is distanced from the local and regional governments, as well as the civil society. This is particularly true when mining activities occur in remote communities where extractive industries tend to operate.

Regional and local governments lack capacity and power to regulate activities that might raise conflict behaviours in their own territories. Consequently, all regional and local grievances regarding mining operations travel directly to the capital city of Lima. Even at the national level, it is the Ministry of Energy and Mines—an institution generally seen as biased towards the private sector—which has the final word when approving the viability of projects, without necessarily having to consult with other relevant Ministries regarding the issues of environment or social development.

Cajamarca, a traditional farming and stockbreeding region, experienced the mining boom when Yanacocha—run mainly by US-based Newmont Mining Corporation—started operations over two decades ago. Newmont’s mining activities in Yanacocha, the world’s second largest gold mine, have built up a negative reputation due to environmental disasters and a record of strong clashes with local communities. Despite this local (and even national) perception of the firm, Newmont decided to attach the Conga project to Yanacocha brand, thus transmitting Yanacocha’s stigmas to the yet-to-be-born Conga mine.

In March 2011, Newmont announced in New York that not only Conga but also Quillish—another Yanacocha-brand project suspended since 2004 due to strong opposition—would start operations in 2016. This was later confirmed by President Humala who, in October 2011, after returning from the Asia-Pacific Economic Cooperation (APEC) Conference in Hawaii, personally gave the green light to the Conga project.

The decision generated surprise among the local population, but particularly with Santos, who trusted his, friend-now-President, Humala and had not been informed beforehand. Santos saw his power undermined. As NGOs and defence fronts started mobilizing, Santos saw an opportunity to gain political relevance by joining the assault. Later that month, the regional government of Cajamarca turned radical by stating that the Newmont’s CEO should declare Conga unviable.

Soon opposition supporters from all over the region began to mobilize. In the midst of intense popular pressure, former Prime Minister and current presidential spokesperson, Salomon Lerner, appeared in a press conference alongside Newmont’s Operations Vice-President to declare the suspension of Conga’s activities. Having a high-ranking government official appear with a Newmont Executive on national television only served to increase distrust for the government.

Opposition continued and, in response, the government declared a state of emergency in Cajamarca, mobilizing police forces and closely watching opposition leaders. By the end of2011, the situation became unbearable. Prompting the resignation of Prime Minister, Lerner was replaced by former Minister of Interior, Oscar Valdes.

Prime Minister Valdes called for an international technical assessment of Conga’s EIA viability. As the report was delivered in April 2011, President Humala introduced a series of new conditions to the project, such as increasing labour and protecting natural water sources. Yanacocha was not previously consulted on these changes, but eventually agreed to the new terms.

Still, since mid-June roadblocks have been occurring in different parts of Cajamarca, generating shortage of food supply and other resources.

Lessons learned by Conga, as a project—and Cajamarca, as a region—could be a milestone in Peru’s history if the right bridges are built. The Government could strengthen the decentralization process, giving more participation to the regional government in EIA processes, mining concessions, right to prior consultation, and wealth distribution. In general, the idea is to get regional governments more involved by increasing their responsibilities and, thus, making them part of the national political machinery.

Mining companies need to improve their strategy by prioritising the strengthening of relationships before starting operations. Not only should these efforts be focused on creating inroads with local communities but also should concentrate on bringing local and regional governments, as well as NGOs,intothepoliticalfold.Inessence,ifdialogue and transparency are not present across all fronts, history will repeat itself. Peru needs to add legitimacy to legality and sustainability to viability.

What do you think about the Conga Mining Project in Peru? Leave a comment below.

This article was published in the July 2012 issue of Global South Development Magazine. You can download it for free here.