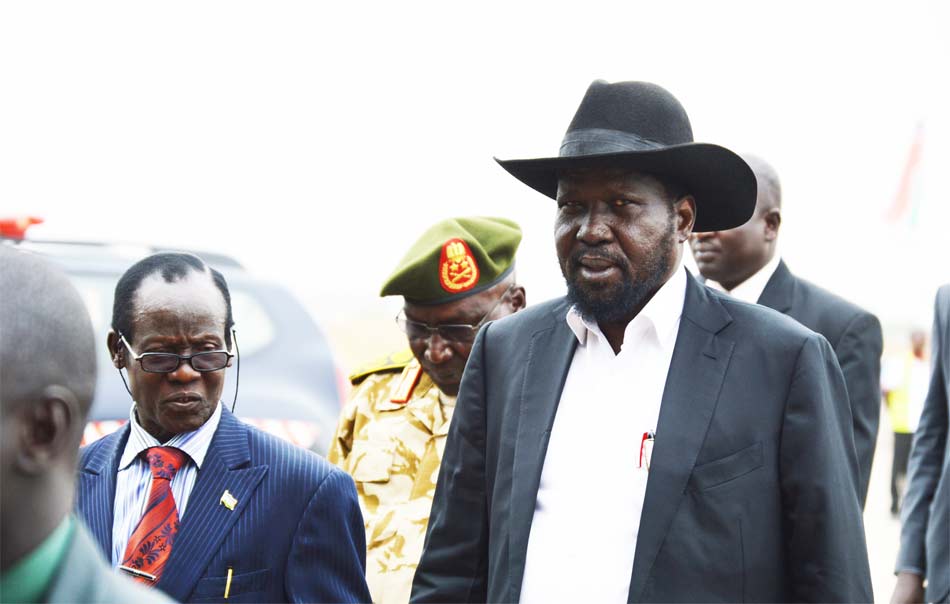 Gabriel Olusanya, the former Director-General of the Nigerian Institute of International Affairs, NIIA and former Ambassador to France, coined the expression ‘area boy diplomacy’ to describe the country’s foreign policy under the autocracy of General Sani Abacha (1993-1998), as conducted by his often abrasive foreign minister, Tom Ikimi.

Beginning in the aftermath of state and natural elections in April 2010, South Sudan has faced an eruption of armed insurgencies, the majority of them led by former Sudan People Liberation Army (SPLA) commanders. In a number of cases, the rebellion are closely related to state and national politics and governance challenges and the often contradictory responses to them have exposed deep rifts both within and between the SPLA and government.

• Insecurity throughout the country has disrupted agricultural activities and exacerbated food insecurity, bringing South Sudan to the brink of famine and a humanitarian crisis.

• The trajectory of the civil war in South Sudan reflects the bifurcated nature of the pre-war political landscape of the country which includes multiplicity of armed opposition groups and related ethnic militias.

•Most armed groups are not fighting for control of the government in Juba and more so this conflict has causal relationship with local issues such as land, representation in state government, cycles of revenge violence and a sense of ethnic exclusion,

• Despite its name, the CPA was interestingly not comprehensive, but instead the deal was carefully crafted to benefit two dominant military elites.

South Sudan, which became independent from Sudan after a referendum in 2011, has since experienced conflict in multiple locations, including between different ethnic groups in Jonglei state. After a violent event on 15 December 2013, a civil war broke out in South Sudan. Despite multiple cease fire attempts and ongoing peace negotiations, violence continues to consume much of South Sudan. Insecurity throughout the country has disrupted agricultural activities and exacerbated food insecurity, bringing South Sudan to the brink of famine and a humanitarian crisis. According to a report by  the United Nations Office for the Coordination of Humanitarian Affairs dated 12 March 2015, 1.5 million individuals have displaced internally by this conflict since December 2013 and this demonstrates the urgency by which it should be resolved.

South Sudan’s combustible mix of armed political opposition, violent ethnic militias and dysfunctional political system are part of the tinder that led to the eruption of the civil war in South Sudan in late 2013.

Despite thirteen months of peace talks mediated by the Intergovernmental Authority on Development (IGAD), the war threatens to re-intensify. The negotiations do not reflect the diversity of armed groups in the country and the region- most of which are nominally allied with either President Salva Kiir or former vice president Dr. Riek Machar, SPLA in opposition and counte-raccusations of impartiality deficits of mediators.

There exist constellation of South Sudanese armed groups which are emblematic of the regional, national and local challenges to peace and the pattern of a war that cannot be resolved by engaging only two of the nearly dozen armed groups in the country and ignoring those that have not yet engaged in the fight many of who do not support the peace process thereby creating a chaotic environment on the ground.

The trajectory of the civil war in South Sudan reflects the bifurcated nature of the pre-war political landscape of the country which includes multiplicity of armed opposition groups and related ethnic militias.

The North-South conflict formally ended with the Comprehensive Peace Agreement (CPA) on 9th January 2005.The CPA was signed by the ruling national Congress Party and the SPLA/M and this signalled a historic compromise: the government in Khartoum was guaranteed sharia law in the North while the south gained the right to self determination after an interim period of six years but the anticipated peace dividend have not trickled down to majority on the ground.

With its provisions for a permanent internationally monitored ceasefire, power sharing and access to oil wealth, the separation of religion and state, autonomy and separate army, the CPA responded to key southern grievances.

However, intra-Sudan conflicts continued to fester and present threats to South Sudan’s overall security environment. Despite its name, the CPA was interestingly not comprehensive, but instead the deal was carefully crafted to benefit two dominant military elites.

South Sudan Defense Forces (SSDF) not only threatened to undermine the authority of SPLM/A (Sudan People Liberation Movement/Army) and the legitimacy of the CPA, but also disrupted civilian livelihoods in many parts of the south

The current national power struggle was sparked off largely because of the political stand-off between President Salva Kiir and other leading members of the SPLM, including a number of former members of the government. A press conference held on 6 December 2013 in which senior members of the SPLM, including the former vice president Riek Machar, the former SPLM secretary Pagan Amum, as well as the widow of the SPLM’s deceased leader John Garang, accused President Kiir of “dictatorial tendencies.” They diagnosed “deep-seated divisions within the SPLM leadership” and demanded that party structures to be reformed in order to make possible “collective leadership.” They called for internal reforms and restructuring in government to meet diversity in the southern Sudan society.

However, there is competing narratives of the events of the previous one and half years. Hannah Bryce, writing for Chatham house – a foreign policy think tank – argues that the current struggle illustrates “the prevalence of political ‘tribalism’ at the highest office”. Thus, in the search for straightforward explanations, ‘tribalism’ is a concept which many commentators readily tap into. However, the key protagonists in South Sudan’s crisis also make use of a distinctly anti-tribalist rhetoric and warnings of ethnic conflict in order to justify their political agendas as well as the use of force.

According to Jok Madut Jok, a cofounder of Sudd Institute and an expert in Sudanese affairs, the violence unleashed on December 15 came as a shock. First, the abruptness of events—how suddenly they erupted on the Sunday night, without warning. Then, the speed at which violence spread, not just from barracks to barracks but then from state to state. The viciousness was a shock. So was the ethnic tone that the violence rapidly acquired, having previously been contained as an internal military issue.

Negotiations between delegations representing President Kiir and Dr.Machar have started

in Ethiopia under the auspices of the Intergovernmental Authority on Development (IGAD), an organization of eight East African countries. The negotiations have so far focused on securing a ceasefire, a positive first step to bring an immediate end to the killing, destruction, and displacement. But this is only the first of many steps. Horrific as the violence since mid-December has been, the crisis also presents an opportunity to address unresolved issues and put South Sudan back on the path of democratization, good governance and peace—a path from which it deviated well before the current crisis

Given that most armed groups are not fighting for control of the government in Juba and more so this conflict has causal relationship with local issues such as land, representation in state government, cycles of revenge violence and a sense of ethnic exclusion, it is important for IGAD to engage them to critically build support for a future peace agreement and to ensure Kiir and Machar are not able to use these groups to undermine peace agreement.

See Also:   Development in Nepal: Jeopardized by 23 Governments in 24 Years

Various initiatives should be undertaken in order to transform SPLA/M from being a highly militarized rebel movement into a politically independent army and democratic Party of which it claims to be and of which it is not. To be successful, the SPLA/M will need to develop a culture of accountability and transparency and to eschew rule by excessive military force. Although Salva Kiir and his supporters are making professionalization of the army a major priority, his views are not always shared by others in the SPLM/A leadership.

The merging of SSDF and SPLA in 2006 even though was problematic, a great deal stability of the country hinges on its success. The SPLA must find money, space and tolerance for the former enemies. It faces a major challenge in transforming from a rebel force into an accountable and transparent governing body and army. Unless SPLM/A can move quickly to establish effective systems of administration to oversee development programmes and respond to widespread grievances, there is real danger that achievements in the security sphere will dissolve under the weight of internal dissent. Given the SPLA ‘s past tendency to respond to dissension with force and for the recipients to respond aggressively, such a scenario could be disastrous for south Sudan

The ceasefires so far signed, between the rebels and President Kiir should address what political future there will be for the former vice president and the 11 released detainees accused of plotting a coup. A political agreement that makes room for increased plurality and addresses the issue of elite infighting within the ruling party would go a long way toward preventing an early return to conflict.

Moving forward, the provision of representative governance opportunities − and at the very least recognizing their absence − offers a more practical basis on which to build longer-term peace. Progress will require measures that address both ethnicity and participation, incorporating the concerns of the many disaffected factions of South Sudanese society into the governing of the country. The government and its international partners should work towards building the capacity of local governance and incorporating the existing complex social structures into the process constructively. This includes the voices of the marginalized as well as the frustrated male youths who are willing to fight to be heard.

SPLM leadership must commit to undertaking significant internal reforms to overcome the weaknesses revealed in the current conflict. An interim party leadership structure and bodies will need to be formed until a new convention can be held. Nomination procedures for candidates for local, state, and national positions need to be freely debated. Regular communication between the local bodies, secretariat, and leadership structures need to be implemented. Focus needs to shift from competition over titles to tolerating – and encouraging –constructive policy debate, open dialogue, and productive dissent both within the SPLM and with other parties. And if visions for the future of the party and its policies cannot be reconciled, the negotiating parties and mediators may need to consider reaching agreement on principles and a process for the peaceful dissolution of the SPLM and formation of new parties.

Joel Obengo is an administrator, human security expert and Development Reporter with Global South Development Magazine based in Kenya. He is the representative for East Africa and Southern Africa Region in Red Elephant Foundation 2015 Fellowship. He recently completed a certificate in Moral Foundations in Politics from Yale University

The Hadza of Tanzania: Inside Story of 21st Century Hunter-Gatherers

by Meerim Shakirova Several developing country issues, particularly those concerned with the environment, such as...
Read more