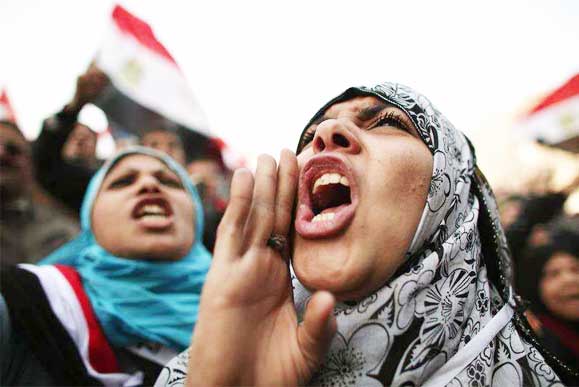 When the heydays of the Arab Spring have subdued; that promising, bright and mesmerizing picture of the Arab world has started to fade. Contrary to popular expectations outside the Arab World, the Islamist fundamentalist and semi-fundamentalists dominate the elected bodies in the post-revolutionary Arab states.

It hasn’t yet been 2 years since the world for the first time saw the magical protests in the Arab world where hundreds of thousands ofwomen, along with their male counterparts, took to the streets and chanted slogans for freedom and democracy. Women’s activism in the Arab world is not a new phenomenon. For instance, in 1 91 9, a number of veiled women in Egypt took to the streets against British rule, demanding independence.

However, the peculiarity of the latest movement was that the global media was constantly present when the women, once again, shunned conservative norms and veils of superstition and camped in Tahrir Square, protested in Sana’a and hoisted their fists in the streets of Tunis.

We saw that almost in real times on our TV screens and social networking sites. We saw revolutions taking place out there. We saw the dictators being toppled and killed and exiled. We praised the brevity and the courage of the revolutionaries. We assumed the dark days of the Arab World were over. We assumed there is nothing but freedom and equality and democracy for all, for men and women, for the rich and the poor, equally, absolutely.

We extended our moral support and sympathy. Some revolutionary leaders instantly became global celebrities, one of them, Tawakel Karman, the Yemeni activist, even received the Nobel Peace Prize.

When the heydays of the revolutions have subdued, that promising, bright and mesmerizing picture of the Arab world has started to fade. Recent media reports claim that, in Egypt, women have been repeatedly harassed in political rallies and, reportedly, have been asked by men to ‘go back to their kitchen and feed their babies’ as the revolution was over and everyday politics wasn’t women’s affairs. Women’s representation was zero in the committee that drafted Egypt’s transitional constitutional declaration.

Contrary to popular expectations outside the Arab World, the Islamist fundamentalist and semi-fundamentalists dominate the elected bodies in the postrevolutionary Arab states. The Tunisian Islamist party, Ennahda, which won 89 seats in the 21 7 seat assembly, called for the Shariah law to be recognized as the principle source of legislation. The Islamist Muslim Brotherhood won presidential and parliamentary elections in Egypt and the 28% of seats went to the more extreme Salafi parties. After their victory, some media reports claim, women in more rural areas of Egypt were punished for the way they dress and talk.

See Also:   Will Libya partitioned into East and West Libya in 2020?

Women rights activists in Egypt fear that the status ofwomen is going to deteriorate than before. ‘ I was shocked the fundamentalists took over and I didn’t foresee a male gender constitution. That’s not what I went to Tahrir Square for,’ an Egyptian activist writes on an internet forum.

The revolutions seem to be hijacked by the fundamentalists, but there are people who still see room for optimism. Though political rights have been compromised, legal rights have advanced and dictators have been overthrown. Some court verdicts have been encouraging, and the level of awareness among women seems to have unprecedentedly heightened. But then again, the rise of the fundamentalists has been unprecedented and scary too.

The way doesn’t look very smooth, but one thing is sure: the desire for freedom is abundant, so abundant that soon in the future we might see another series of revolutions sweeping throughout the Arab world, once again led by women, but this time for women.

(Written as an editorial piece on GSDM’s July 2012 edition, Editor can be reached at manoj.bhusal@gsdmagazine.org)

The latest estimates are that a staggering 3 billion people or more cannot afford a healthy diet. In sub-Saharan Africa and southern Asia, this is the case for 57 percent of the population – though no region, including North America and Europe, is spared.
Read more

See Also:   The Mediterranean Migrant Crisis: The Option Between The Devil And The Deep Blue Sea