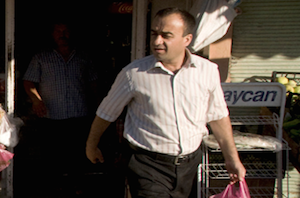 In an effort to give a voice to the Syrian people, GSDM Latin America Editor and photographer Diego Cupolo wrote Seven Syrians: War Accounts From Syrian Refugees a non-fiction book by 8th House Publishing going to be released in January 2014. Seven Syrians presents the war as experienced through Syrian refugees living in Reyhanl, a Turkish town one mile north of the Syrian border that was bombed in May 2013 for hosting a burgeoning refugee population. The interviews were conducted between July and August 2013 and have been adapted as monologues to create seven flowing narratives. The following is an excerpt of a personal account from Seven Syrians that were gathered while Diego Cupolo volunteered at Al Salam school for Syrian refugees in Reyhanl. Global South Development Magazine’s December 2013 issue also featured the same story.

Shelter in the Caves

I went to the caves after the military post near my village was attacked by farmers. They weren’t part of a militia then, no organization whatsoever, but they were armed and they managed to kill more than a hundred government soldiers.

It was a surprise attack. Their first response after the military started shooting protesters in the streets. Some celebrated, but I didn’t. I knew the air raids would come shortly after and they did. Bombs landed on my village every single day for the next two months. It was the worst experience of my life.

I took cover in the caves, up there in the mountains, and saw the bombs fall on what used to be my home. All I could do was watch. Each bomb was strong enough to destroy twenty to twenty five houses.

Worse, each bomb produced a very high, horrible screeching sound when it exploded. I don’t know what they’re called officially, but we call them pressure bombs. They were one of the many gifts Bashar received from Russia.

Usually, the air raids started at one or two in the morning when everyone was sleeping. Many people died this way, mostly children. A midnight rocket.

I stayed in the caves a total of 45 days, just waiting for the bombs to stop falling. I had no choice. During the initial protests, I broke my leg in three places. I could barely walk. I was on crutches this entire period. For food, for water I was completely dependent on other people. Fortunately, I was not alone.

There were many families in those caves, large groups of people I had never known before. As the time passed, we all became good friends, we all relied on each other.

It was a new experience for me because I was used to living alone. I would come home from work alone, watch TV alone and then go to sleep alone. There, in the caves, we did everything together. We took care of each other. Many had it worse than I did.

See Also:   COVID-19 and conflict: communicating for peace during a global health crisis

One older woman, she was blind. She was always terrified. She would hear the helicopters hovering above, but she couldn’t see them and she had no idea if they could see her. Imagine.

In the day time, we would take her outside to get some fresh air, you know, to let her breath. We all tried to get out for air whenever possible and every time we went out we took the old blind lady with us. We’d sit her down on a good rock so she could relax, but she never relaxed.

That’s just one of the people I was with. There were many. Mostly women, children and the elderly. Men stayed in the village to fight Bashar’s army. I was injured, so I couldn’t fight, but even if I was healthy I would have stayed away. I don’t want to die. I’m still waiting to marry, you know, this is very important for Syrian men. After university we are supposed to get married and start a family. I’m still waiting for this to happen.

It could’ve happened. There were some younger women in the cave. Sometimes they would talk to me. They told me not to worry so much, that I would find a wife after the war, but it’s not easy. The war doesn’t look like it will end anytime soon and I’m only sitting here, waiting, getting older. I still hope for a family of my own some day.

The fear I have is an abnormal kind of fear. I fear the rockets and the bombs more than others because there is so much I haven’t accomplished in life. Up there in the mountains, in the caves without food, it’s just suffering … just fearing … just thinking about the future … just crying sometimes.

There are questions, so many questions that you start asking yourself. Where can I go? What can I do? Will this war ever end? How long can I keep living like this? Should I keep living?

We all asked ourselves these questions in the caves. None of us knew whether we would make it to the next day or not, whether we would endure the next battle. All Syrians are terrified about the future. We have no idea what will happen to us and this is an unsettling thought.

My house was hit by a rocket. I have no place to go back to. The Syrian Army bombed our village to punish us. They said we allowed those farmers to attack the military post so everyone must pay the price, even the children. There is no place for civilians in Syria, only armed rebels and Bashar’s army. I had to leave.

As soon as my leg got better, I crossed the Turkish border to see what I could find in Reyhanl. Many Syrians were going there so I thought maybe I could find a job or start a new life while I wait for the war to end. This has also been difficult. Local landlords take advantage of refugees. They see us like money. They charge us Istanbul prices to rent apartments in a little farming town.

Employers also take advantage of us. They pay us less than Turks. Much less. I was being offered 20 Turkish Lira for 15 hours of work before I got a teaching job at a private school.

I’m just barely self-sufficient now, but still, nothing is easy. You know there was a terrorist attack here? I was having a tea in the town center when the first bomb went off. It couldn’t have been more than 25 meters away from where I was sitting. I ran as fast as I could. I went so fast I lost my sandals and ran barefoot over broken glass. My feet were a bloody mess. I still have some scars. See?

The locals blamed us for the attack. They said Syrians brought the war across the border. Angry mobs destroyed every car with Syrian license plates. We received threats. Our neighbors told us to move to another town. I didn’t leave my house for 10 days. I didn’t eat and lost two kilos during that time.

Now Reyhanl is more or less back to normal. I work, I eat, I sleep, but I’m still looking for a way out of here. People say it’s easy to reach Europe from Istanbul. First, I need to save up money. Then there’s the paperwork. Always paperwork and I don’t understand Turkish.

I just want to live without war again. I’m so tired of migrating. Of moving, changing apartments, being without friends. Being without family. I want to start a family. No one can understand our suffering.

The Fergana Valley – A Region of ‘Dormant-Violence’ or ‘Fresh Opportunities’?

Story of a Rural Bolivian University

by Rachel Satterlee  A university on the eastern slopes of the Andes in rural Bolivia...
Read more