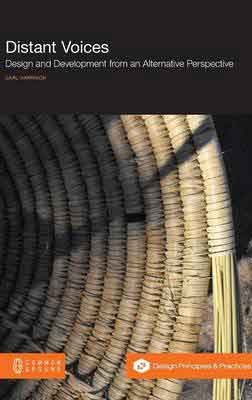 Carl Harrison is a designer, development consultant and author who has spent many years assisting craft and design orientated projects in the developing world.

Over the years I have spent a good deal of time helping to develop small and medium scale craft and design based projects in the developing world. For most of the early part of it, I was happy to promote the well-worn internationalist creative vocabulary taught within the Western design school system. The rich cosmological and visual languages of many parts of the developing world were, and still are, used with impunity by professionals and students with scant regard paid to the deeper meanings that lie behind their visual appearance, and even less to their provenance and ownership.

Spend some time as I have in any retail outlet or gallery in any of the world’s capital cities and you will find that many of the craft and design products on sale are those which we associate with, what we euphemistically call, the developing world.Baskets in a myriad of sizes and finishes, wooden giraffes and bangles of every conceivable colour all compete for your attention alongside brightly coloured shirts from West Africa and sandals from the Far East.

Small scale craft and design based enterprises employ a great many workers from communities around the globe, with over 80% of women in the developing world taking part in both formal and informal craft activities. United Nations figures show that the creative industries exported 624 billion dollars worth of goods around the world in 2011 and that the proportion of craft and design exports from the developing world made up 227 billion dollars of that total figure. If we were to dig a little deeper, however, we may begin to see a more complex picture altogether, one in which many small and large scale producers often remain at the low profit end of the value chain and struggle to create meaningful long term sustainable design directions of their own.

“Giving customers what they want” has been part of this creative trajectory for both manufacturing and marketing professionals the world over for many decades, but this has resulted in a mono culture of creative directions orientated around the functional needs of primarily western consumers at the expense of more interesting and innovative diverse cultural narratives.

It is clear that the opening up of markets by the global economy and the move towards a single creative vocabulary is a great idea, if you are in control of both the large scale industry needed to produce the goods as well as the creative vocabulary itself, but what of others whose own creative languages are in danger of disappearing forever under this barrage?

You May Also Like: A Few Thoughts on Engineering Peaceful and Inclusive Societies

Why is it that we see so few international high value brands emanating from the developing world and why is it so many in these locations want to own brands from outside their own borders? Exactly who is it that controls this dominant global creative vocabulary and why does the developing world appear to be doing so little to challenge this narrative? The logic of the dominant ideology is clearly persuasive as witnessed by the present creative world order, but this reality is at the same time problematic for countries wishing to develop their own high value design-based industries.

There are many publications in print already on the subject of the design process, but most if not all concentrate on the internationalist language that has to some extent had a negative impact on other more ancient and meaningful creative directions.

For the first time this book asks pertinent questions, about the nature of product in its non-western context, the social, cultural, political and economic reasons why many producers within the developing world appear to be unwilling or unable to forge creative directions of their own.

How did countries within the developing world with rich visual vocabularies and creative histories of their own get into this present situation? When was it that in many cases their own ideas and cultural realities became subsumed under the blanket of a global mono-directional vocabulary?

I have found in my travels that the solution to creative problems are often found much closer to home than those involved care to imagine, but a perception of higher value often placed on trajectories determined from outside their own borders by internationalist design professionals often blinds many to the potential of more culturally specific but globally marketable solutions.

Developing countries are in a perfect position to create new and unique product directions that can serve the needs of not only their own populations but also those of other continents. This can be achieved in part by simply remembering that their own cultures have not only much to offer the world, but that their own creative vocabularies can compete on equal terms with the international vocabulary that seems to permeate and influence many of the creative directions chosen by all.

The rich material and cosmological worlds found in many parts of the developing world are therefore the main focus of this publication, but it also visits the internationalist vocabulary itself in order to understand its world wide appeal. It is hoped that once an understanding of the important role traditional vocabularies can play in the development of innovative creative directions is gained, those within the developing world itself will at least be in a better position to take advantage of them.

The central aim of the publication is therefore to primarily encourage those in the developing world to initiate their own unique creative strategies which build on the more meaningful aspects of their own cultures and which also look to their own traditional crafts as valuable initial starting points. Traditional craftspeople were and still are the guardians of the rich vocabularies that lie at the heart of the direction of this publication and so it is important that their knowledge and experience play a major role in any new initiatives.

See Also:   The Cookstove That’s Ready To Switch On The Developing World

In this narrative it is proposed that a new kind of working collaboration be built between archaeologists, anthropologists and designers enabling them together to forge a deeper working understanding of traditional vocabularies and cultures and to help initiate unique new kinds of contemporary creative product.

The subject at the centre of this publication is one that is clearly complex in nature, but it is one now well over due. It is now high time for those with rich cultural traditions within the developing world to question the present global creative narrative that they have followed for so long and finally lead in the development of new directions of their own.

It is clear that no one can be sure about what product will be in the future, but as the explosion of world travel continues unabated and the search for experiences of meaning grow among our populations, the developing world is in a perfect position to be able to offer far more meaningful products for those looking for more than merely functionality within their purchase.

The craft and design industries of the developing world today clearly find themselves at a particular crossroads. Do they continue to follow the well-worn path of producing low technology goods that mirror the perceptions of both producer and consumers the world over, or do they forge a more difficult route in which they take more control of their own creative directions and make more of their own cultural realities?  This is a choice that I do not have to make, but it is one that some of the poorer parts of the developing world must face up to if they ever wish to create the high value brands necessary to compete on equal terms with the design studios in the richer parts of the globe.

You May Also Like: Arts for Social Change? Creative Projects Empowering Women and Youth

I feel strongly that the time is now right for those in the developing world to take stock of the unique vocabularies that make up their own functional and cosmological realities and develop higher value consumer goods that challenge the global design orthodoxy which has been with us for so long.

It is now time to celebrate creative difference over predictable similarity and by doing so help to make the world a much more interesting and stimulating place to live in. As both cultural and genetic variation play such an important role in creating stronger societies it is hoped that in time the creative voices that have remained so distant for so long will eventually reverberate in all our ears for the betterment of all.

“These are exciting times to be young in the developing world”

When many of her friends and colleagues were busy setting up their ambitious careers in big multinational companies,...
Read more